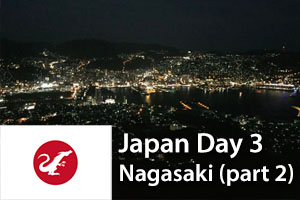 I’d like to start with something that I forgot to mention in my previous post. While I haven’t yet seen anything of the Nagasaki Kunchi Festival at this point, I did often hear something going on in the distance. You’d hear cheering and gongs going on from far away. But what was noticeable was that wherever an event would start, it would kick off with a bit of fireworks. Now let me repeat that: a bit of fireworks. Do you get it? A bit… of fireworks. A bit. A-bit… A small bang. You hear me Hasselt? A bit. A little… not some 45-minute money-burning spectacle…

Anyhoo, now we’re back at the hotel, ready to join our fellow sawadee travellers to go to Mt. Inasa (or Inasayama if you wanna sound fancy). Inasa is like you would think, a mountain, that looks down on the city of Nagasaki. It is well known as one of the best city views of Japan and rumor has it to be even one of the best in the whole world. Our Guide Mitchell wanted to gather us at a specific time so we’ll be up there to witness the sunset. How romantic…
You can take a bus ride all the way up Mt. Inasa, but we made it a little special (and easier) by taking a quick bus to the ropeway. From there, you can enjoy a wonderful view as you slowly glide pass the city and up the mountain. I wish I could enjoy it to the fullest, but my fear of heights got the better of me: 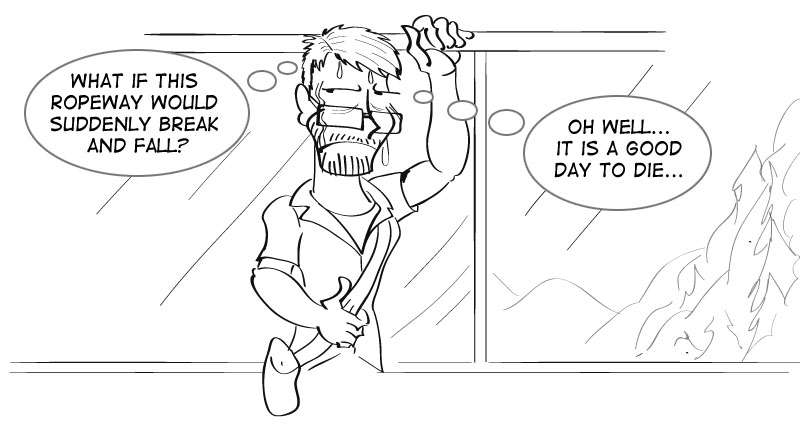 An English announcers voice inside the ropeway informed us about the sights of Nagasaki, but for the Japanese version, we had our own little Japanese lady inside to repeat the whole thing (and also to welcome us as we entered and to say goodbye as we left). We quickly felt sorry for the girl, as that was her job. To be in this ropeway all day and say the same tourist nonsense, over and over and over again. “I hope she gets paid well for this…”, I said to our guide. “Probably not.”, he replied. 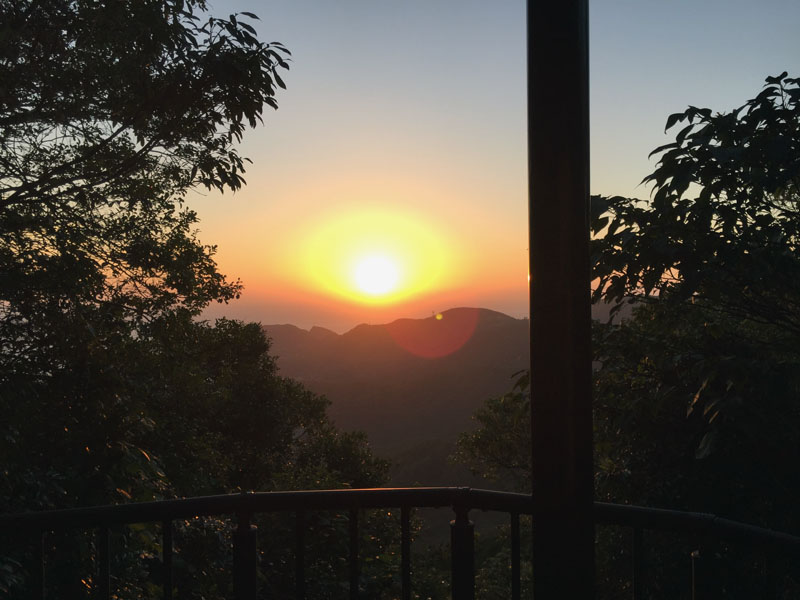 Once you’ve reached the summit, there’s a lovely path filled with lights to guide you to the observation deck. This place is starting to feel like the perfect location to bring a date. And it seemed to be that way, as there were loads of couples going to the deck as well. So if you like romance…with a lot of other random people, this is your jam! Oh and do bring a sweater! It is kinda chilly this high up, and once you’re on the top of the observation deck, you’ll also get a healthy dose of wind blowing in your face.
The deck wasn’t crowded at first, but when it got darker it was packed with couples, tourists and many photographers, each with their own expensive equipment, ready to take that perfect picture of Nagasaki. At this point I was happy with my height, for I could easily stand behind the Japanese crowd and still perfectly enjoy the view. There is a little Easter egg on the deck. On the floor you have many lights all shaped round…except one. One is heart-shaped. A Japanese couple was quick to point that out when I passed it, not knowing of its existence. They even insisted I should take a picture of it when they saw my phone in hand. This became the 3rd time I’ve touched a heart today…so ah…where’s my love?! 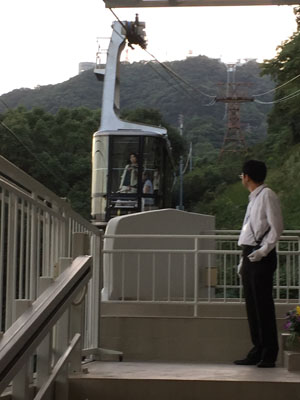 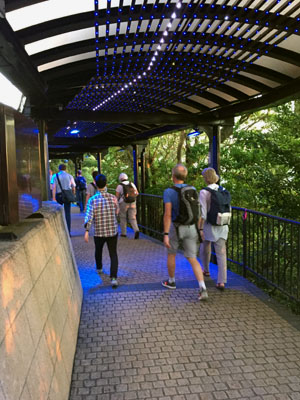 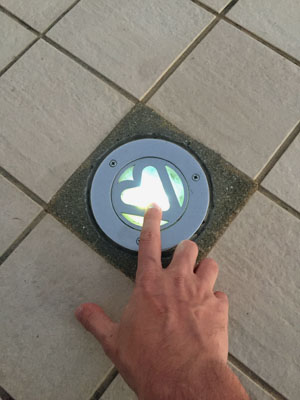 As happy as I am with the camera on my phone, there was no way I was able to capture the beauty that I saw from on Mt. Inasa. And even if I did have a fancy camera to do so, it really is one of those ‘you should have been there’ moments. I can’t recommend it enough. If you visit Nagasaki, you owe it to yourself to visit Mt. Inasa. So thank you Mitchell for taking us here. It was a sight I’ll never forget (damn, that sounds so cheesy…). 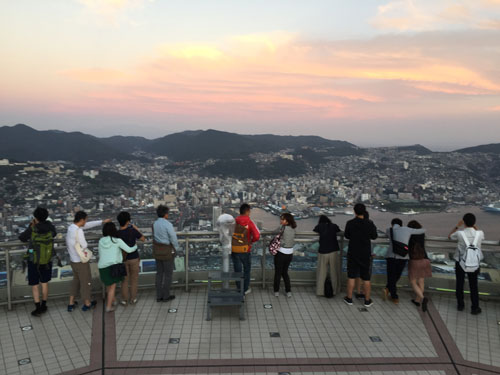 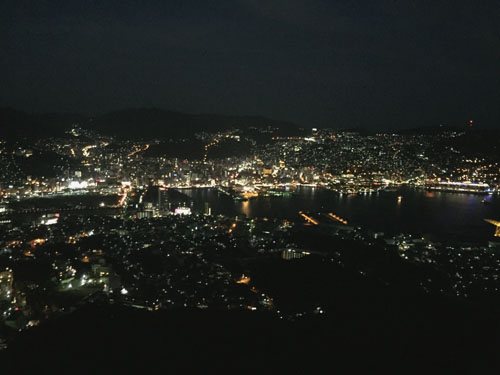 Back in the city, we still had a chance to enjoy the final bits of the Kunchi Festival. We went to the docks where there was some kind of Japanese fair, as there were food & game stands everywhere. We’ve tried all kinds of delicious stuff, but it can all be summarize to the word ‘greasy’. Tasty but greasy. Game-wise there were loads of children literally fishing for real fish at game stands, I reckon whatever they caught, they get to take home (as pets I hope!). While most of the other game stands were vague in what the exact purpose of their games were, one really stood out. A stand filled with all sorts of packages. That’s it. The game is to feel at the packages and guess which of the packages holds the biggest price. You might win a tiny stuffed animal, or a brand new Wii U videogame. We saw at one of these stands a group of girls, who were touching the packages with such intensity it looked as if they were giving the packages a better massage than you’ll ever get in your life. 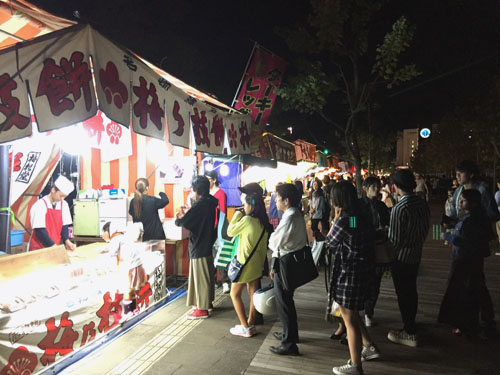 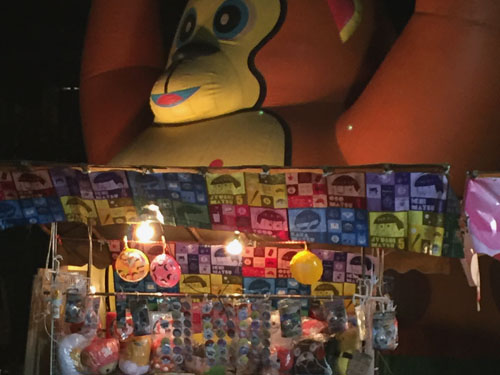 After seeing most of the fair, we came across a crossroads where there were hundreds and hundreds of people gathered. Our guide Mitchell asked a local what was going on, but apparently the man didn’t know either. All he knew was that something was about to go down, judging by the crowd. And indeed, soon after we started hearing gongs & drums closing in on us. The sounds were coming from on a boat… on wheels, pulled by a large group of Japanese men. Jup, this is the Nagasaki Kunchi Festival for ya! 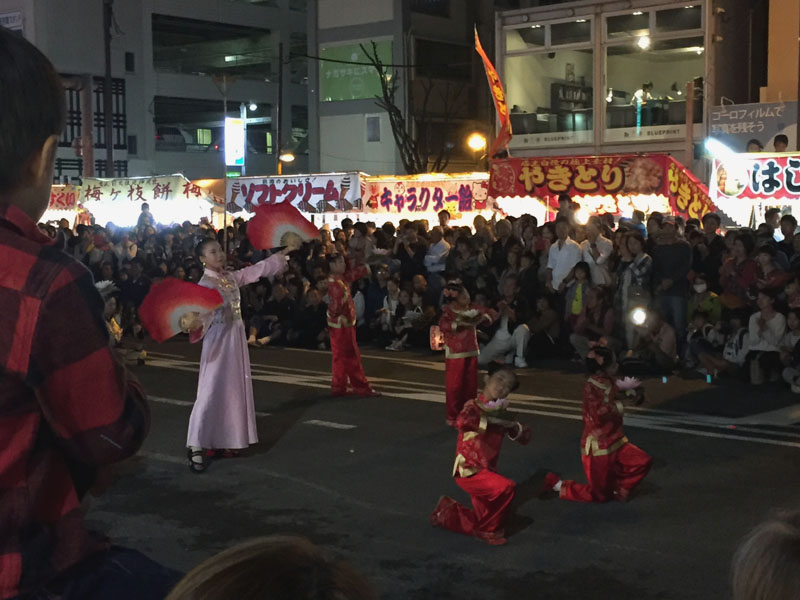 The street was cleared to make room for this boat, along with its crew. Children & women then treated us to a performance of slow dancing to a gentle beat. Nobody in the crowd made a noise, and I couldn’t recall the last time when I saw so many people be ever so silent. It instantly set the mood for what was yet to come. After this act, the drums from the boat started again. I saw now that there was another group of children on the boat, providing us of these epic beats. The men near the boat slowly started to chant along with the beats, as the pace started to pick up. I have to admit, I was started to get goosebumps from what I saw. The crowd was also getting louder and more excited. Men in kimonos ran around the crowd, waving their hands in the air to hype everybody up. Suddenly firecrackers on the ground were lit, and the men grabbed hold of the boat and started to move it back and forth. Everybody was cheering while this was going on, and the children on the boat went all out on beating drums & gongs, as if a thunderstorm was going on. It was extremely bizarre to watch, but awesome at the same time. Everybody kept cheering as this huge boat was getting dragged left and right, but once they started to spin the boat, everyone just lost their minds. 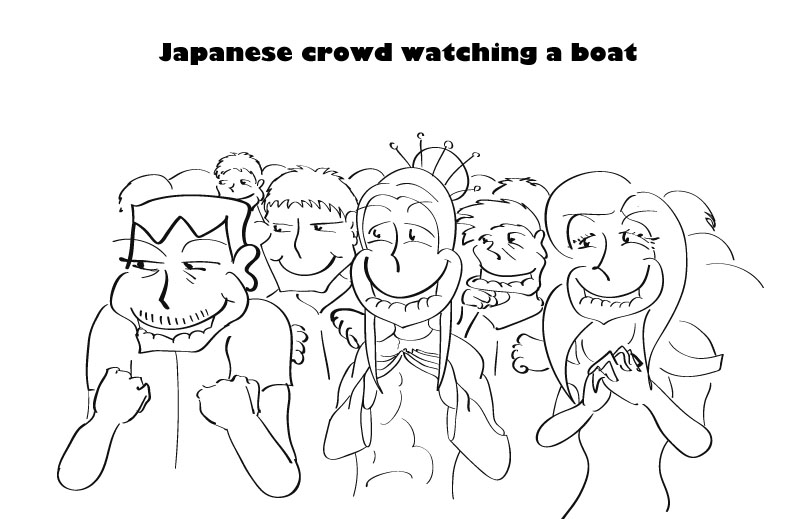 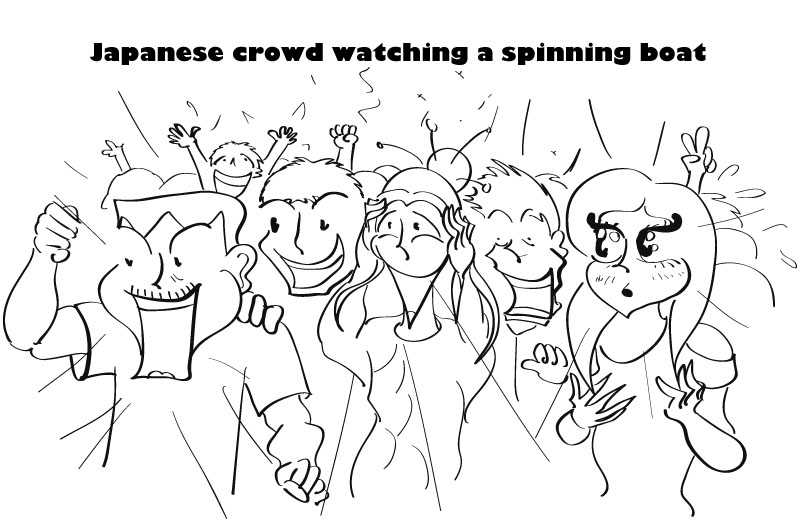 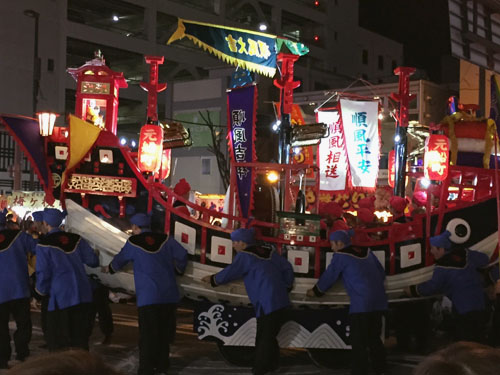 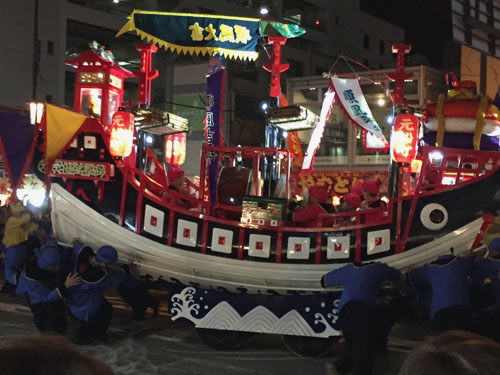 What the exact meaning of all of this was remains unclear to me. I couldn’t find a direct explanation of this performance other that is a ‘dance’ in tradition of the festival. So if anyone out there can tell me what exactly was going on, do tell please. I did find a video on YouTube to sort of show what was going on, but there was a totally different atmosphere when I saw it. Probably because it was on the streets instead of a set stage and in the evening, everyone was more fired up and not so subtle.
The strangest thing about it though, was that it didn’t stop. They kept pushing and pulling the boat, spinning it around like crazy. And they kept going…and going…and going. And the kimono hype-men kept waving their arms around non-stop. And everybody loved every minute of it. It just didn’t stop! What’s going on?? After about half an hour or so, I gave up. I hope I wasn’t too disrespectful for leaving. The chants were already stuck in my head (it sounded to me a lot like the Dutch word “draaien!” which means “to turn/spin”, which would make sense…) and I think I’ve seen enough ‘boat-turning-action’ for the following year. I headed back to the hotel, as we had to get up early anyways to get ready to leave for Hiroshima.

Thanks Nagasaki, you were a good start of the Japan tour!