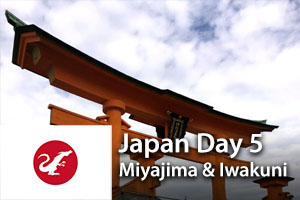 On the second day in Hiroshima you can take a trip to Miyajima, a small island near the coast of Hiroshima. You can easily get there within an hour by train and boat, by using your rail pass. On Miyajima there’s the special Utsukushima shrine and the famous red ‘floating gate’ that symbolises the boundary between the spirit world and the human world.

Getting to Miyajima is indeed very easy and it feels like a must-see if you’re in the Hiroshima area. Do come when the tide is high, else it’s kinda…meh? Enjoy the dickish deers while you’re there too. In the afternoon we head out to Iwakuni to view a…bridge? Ha, why the heck not.

Deer, knitted caps and a park

By the time this entry is posted, it’s Chirstmas time! So yeah, happy holidays to you all out there! And do you know what is very Christmassy? Deer! Them lovely brown hoofed mammals that pull Santa’s sleigh. And as luck would happen, today’s post features deer! Just look at it! 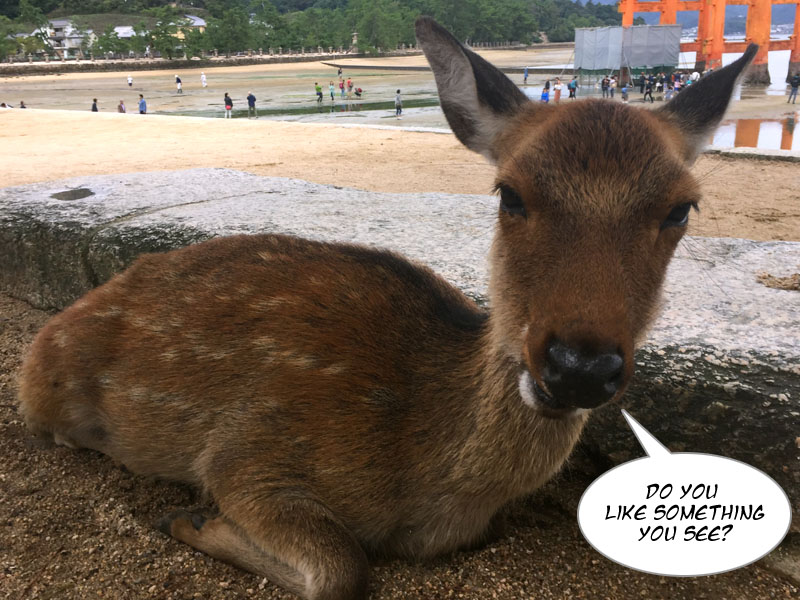 Look how goddamn cute it is. Them deer. Gotta love it! You just wanna rub it’s head and take it home with ya! It’s so goddamn cute. Well, as cute as they may be, most of them are total dicks. But I’m getting ahead of myself here, we’ll get to that.

Our second day in Hiroshima wasn’t spend in the city itself but on locations nearby. We started with an island nearby, Itsukushima, better known as Miyajima (Japanese is such a funny language!). Getting there couldn’t be easier thanks to the rail pass. You just jump on a train to Miyajimagunchi Station where there’s a ferry waiting nearby. Just walk to the pier, flash your rail pass again and up you go on the ferry to enjoy a short boat ride to the island. From on the boat you can already see the famous Torii gate in the distance, and many people gathered on the edge of the boat, trying to take the perfect photograph. It was kinda silly, since you can get a much, much closer shot of the gate once you’re on the island. Oh well… 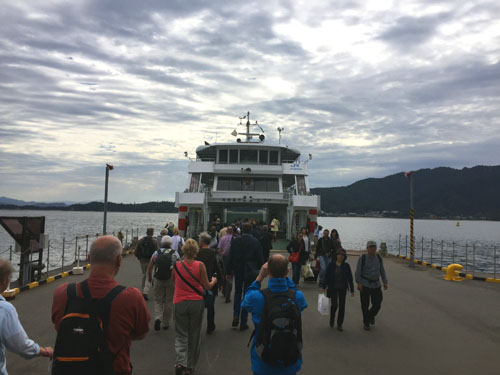 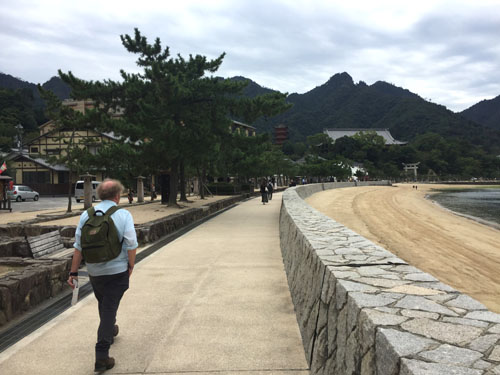 I mentioned deer right? Because that’s what you’ll get once you arrive at the island; deer! Wild deer, just wandering around, not giving a damn. We were warned to watch out with our belongings, but not because of thieves (seriously, Japan feels like the safest place on earth) but because the deer will mostly try and eat whatever you’re holding. Cloth, paper, cell phone? Deer don’t care, they’ll eat it! And they really don’t care. They just walk straight up to you with their begging eyes, expecting you to feed them. And if you don’t, they become total dicks. 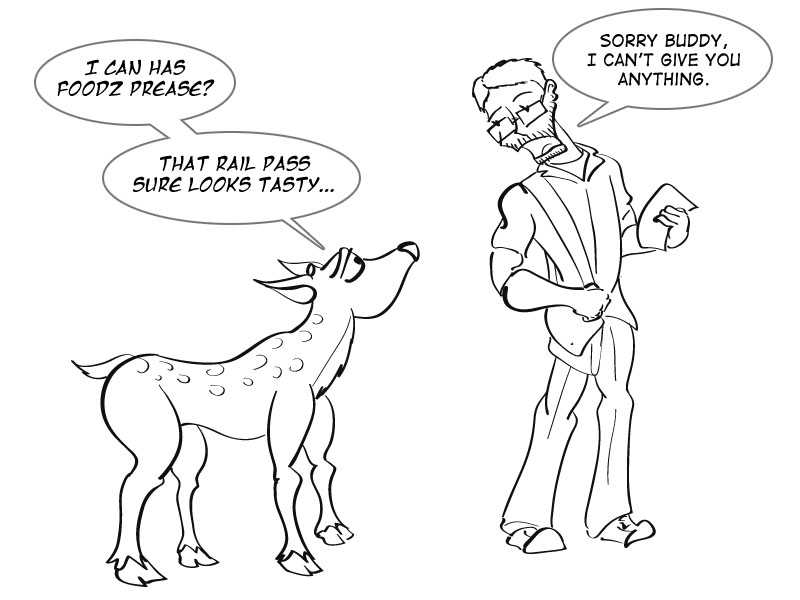 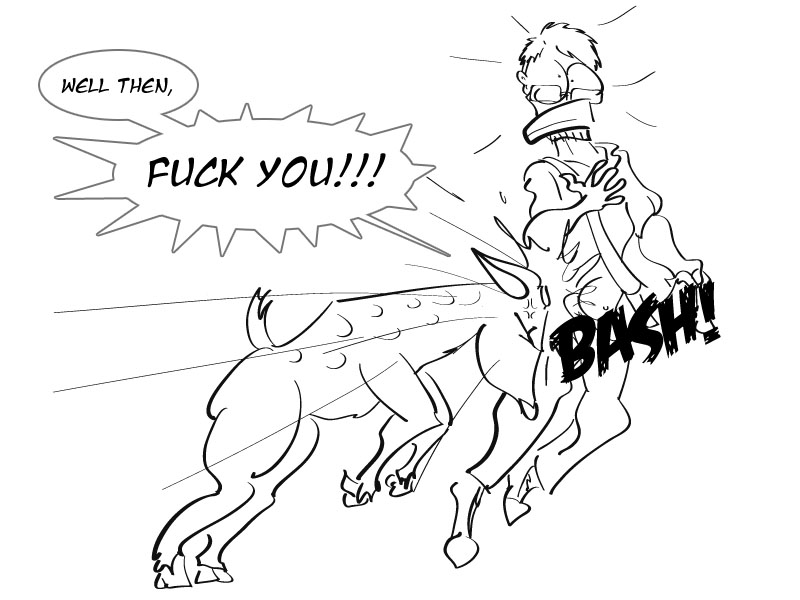 I first felt sorry for the lads that their antlers have been removed, but after seeing their dickish behaviour I was pretty happy about it. Those headbutts they give can hurt like a motherfucker.

Off we went to the Itsukushima Shrine where we could get up nice and close to the Torii gate. The gate is famous for being that iconic picture you almost always seen in every tourist advertisement about visiting Japan. And it would have been very special to see it would it not have been for two issues. The first one, was the fact at the moment, the tide was low. Now that just bothered me personally. You could if you want to just walk up to the gate and touch the darn thing. Maybe even walk through it and see if you really do end up in a spiritual world (if we must believe the legend). But I couldn’t help but wonder how much more magical the gate and it’s environment would have looked when it’s surrounded by nothing but water. Alas, for the high tide we had to be there late in the afternoon, while it wasn’t even noon at that point. The second issue was purely bad luck. A part of the gate was under reconstruction at that time. So you couldn’t enjoy the beautiful orange gate in it’s full glory, which was a shame. 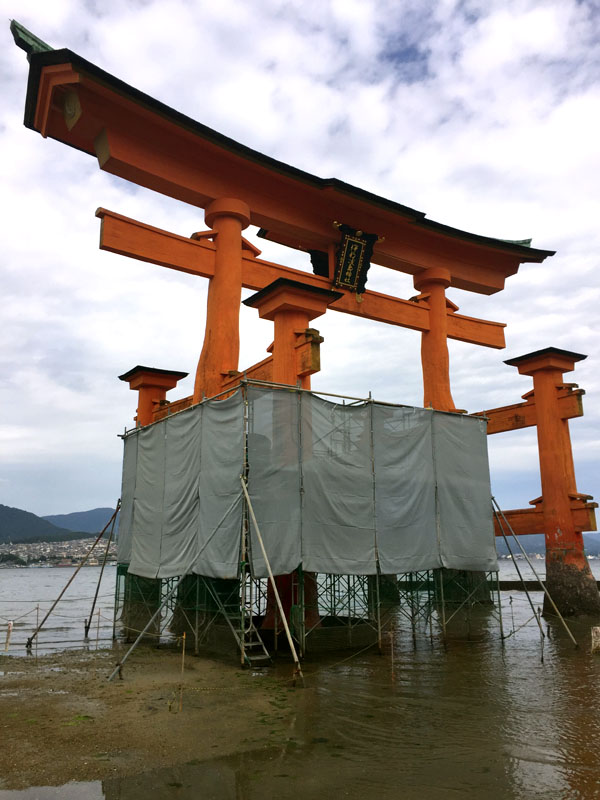 The shrine complex itself was a wonderful construction to behold, alas very crowded. Another place for you to donate a coin, bow, clap your hands and bow again. But again, it was missing that special something at the low tide. So my overall advice is, visit the Itsukushima Shrine in the early evening. Seeing the massive wall of Sake barrels did made me giggle. 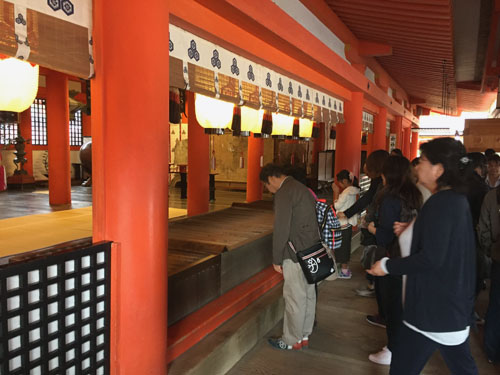 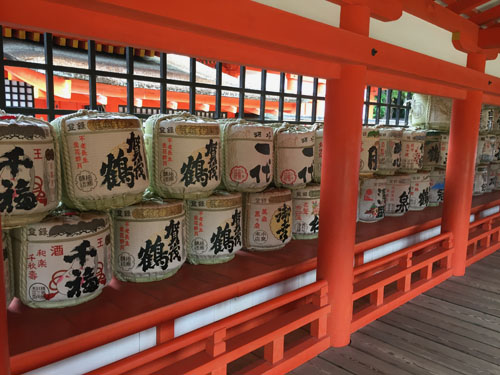 There is a distinct charm about the village of Miyajima, and while there’s loads to do and see, (especially if you’re into forests and stuff) we’d settled for visiting the nearby temples. As the castles in the city of Hiroshima taught me more about the history of Japan, it was now time to discover more about their religion, Buddhism. 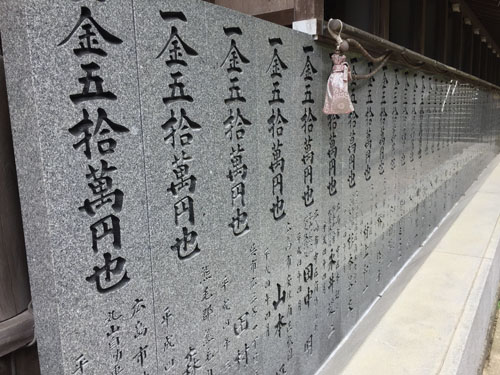 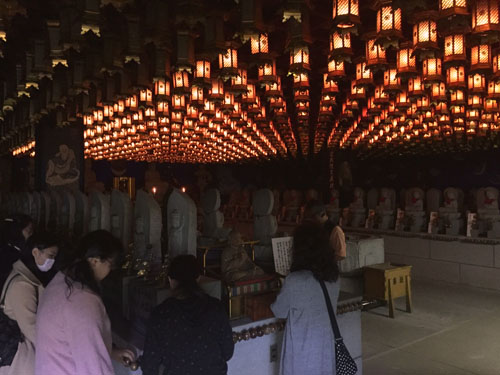 Looking back at it, it’s sad how ignorant I was while exploring the several temples and shrines. It didn’t occur to me the importance of it all. I stood at the Diasho-in temple, unaware that it’s actually an important Shingon temple of Buddhism. Then again, I wonder how many people there truly were aware of its value. You mostly just see tourist with big ass cameras. We were however able to join in on a small service that was going on in one of the temples. It is hard to explain though what was exactly going on. You just see a Buddhist priest chanting in a very monotone voice, non-stop. Maybe we ought to have stuck around a little longer, as when we were quietly leaving, the priest started to chant more energetic and waving several charms around. We couldn’t tell if he was blessing us all, or curses us all. 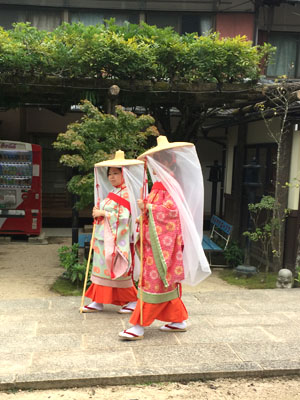 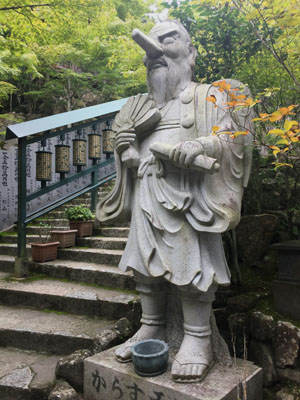 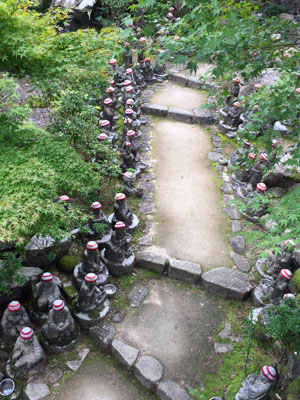 On our way back down we walked a path surrounded by many if not hundreds of little statues. Most noticeable about them was that every single one of them had a knitted cap on. It looked totally silly at first, but you see what looks like an entire army of knitted caps, you start to become curious. My guess at that point was that the locals wanted to protect the statues of getting cold in the upcoming winter. After a bit of research, that doesn’t seem to be the case. There are many theories but the most popular ones are either that the cloth is there to expel demons and illness, or a more morbid one; that the cloth is a gift from parents who lost their child and hope that a gift would grant their child a good afterlife. That’s a messed-up thought to have when you see knitted cap and aprons on hundreds of statues.

Do not worry if you think that Miyajima is only about praying and knitted caps. There are plenty of stores and food stands in the village for all your cravings. I was able to dig in to some Momiji manju, which is some sort of local cookie. Well it’s more like a little cake…or even a steamed bun? Anyhoo, it’s soft and it comes in different kinds of filling. We had some hazelnut, which was delicious but ever so sweet. Japanese treats tend to be that way, soft & sweet (like their ladies, ta-dum tssh…). Oh, and I had fried chicken meat…on a stick! 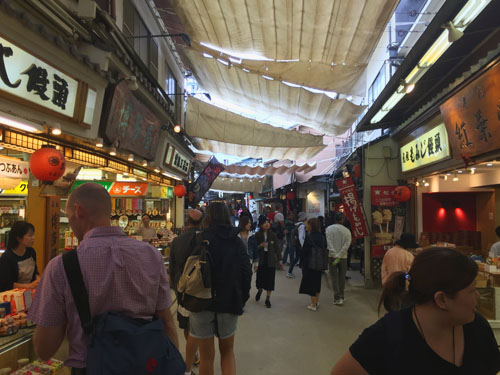 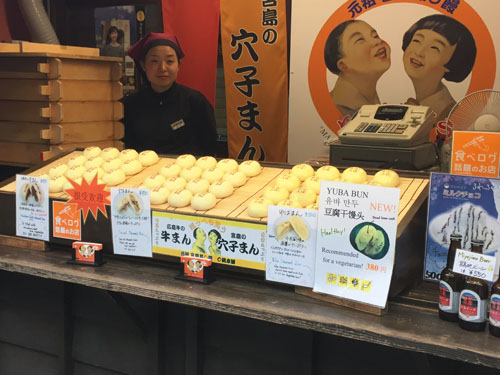 After Miyajima it was time to head out to Iwakuni, to view a bridge. Yes, a bridge. That bridge better be something special. And well, it is. Legend has it that every bridge built before it there was always destroyed in a flood, so the Japanese carpenters were like “Aha! A challrenge! We now bruilt greatrest brigde” (My god, that sounded very racist…) and they built a bitchass bridge that stood strong for hundreds of years. Mother Nature couldn’t do anything with their floods, so she called in a typhoon to eventually bring it down. And what did the Japanese do? Simply rebuild it! Bring it on Mother Nature, you twat. 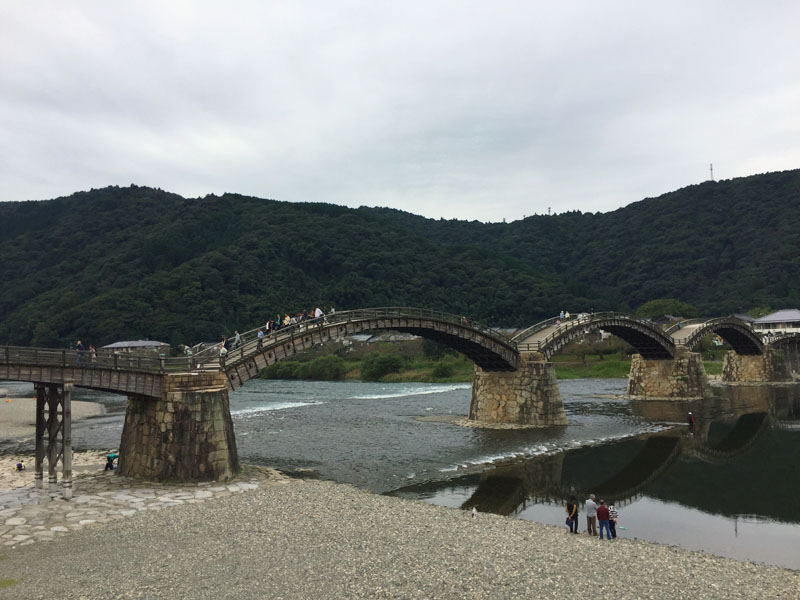 Because of the size of the bridge, and the curves, it’s not your standard bridge to cross. They’ve added many thin steps to go up and down, else there’s no way the average person could get across. It also has been a bit rainy, so the wooden steps were a bit slippery. It didn’t felt entirely safe crossing that damn thing, but hey it’s a challenge at least.

Once on the other side, we have the Kikko Park. While there is a lot to see and do, most of us settled for seeing the first fall colours appear in the trees. That way I sadly missed out on seeing some white snakes, if only I would have known. The park is still very delightful, and even in fall there were already small hints of the upcoming cherry blossom in spring. Right now there was barely anyone in the park, but we were certain the place would be crowded once everything turns from green to pink. 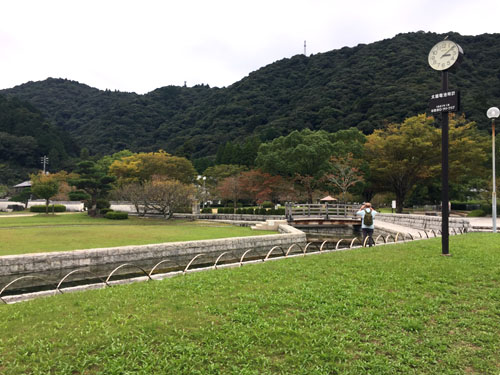 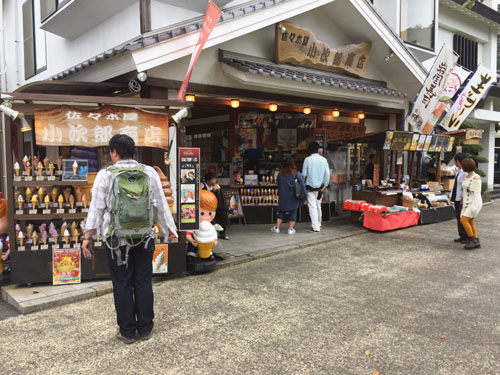 Tired from all the walking in Miyajima (and all that dodging of incoming deer headbutts), we were pleased to sit on a bench and enjoy some soft ice cream from a local shop. The amounts of different flavours one could get, is unbelievable and yet, as the jackass that I am, I just went for standard strawberry & chocolate. I should have tried at least green tea flavour, as our guide recommended.

Back at the station to go to our hotel, we got an announcement to be careful, as a shinkansen train would pass. We all go excited to see a passing shinkansen at full speed, however… 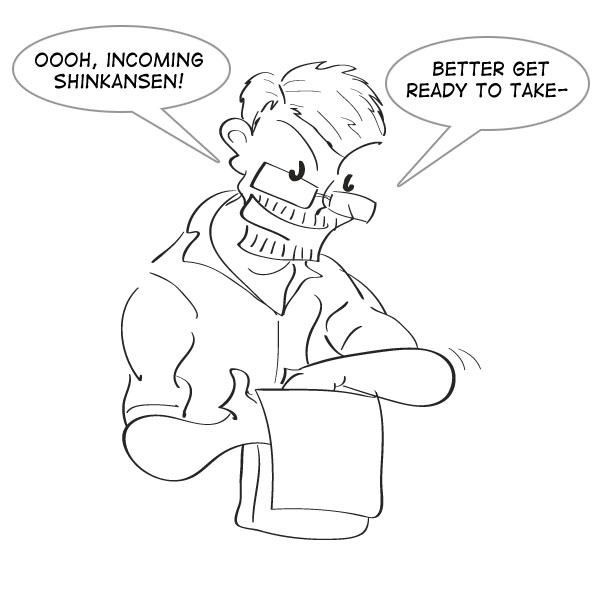 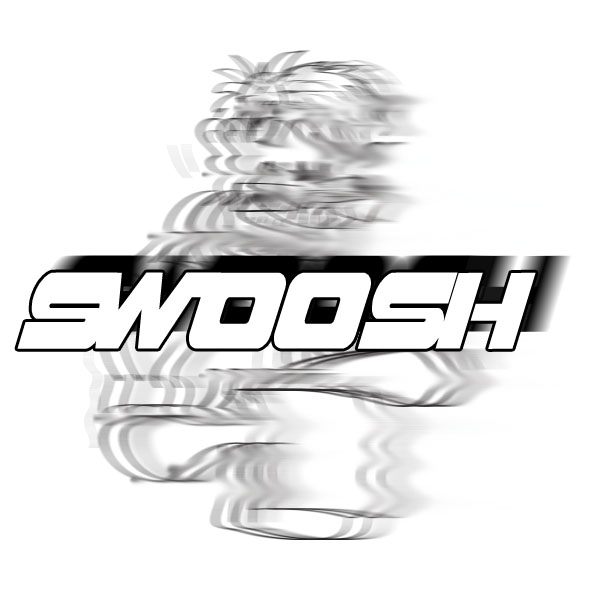 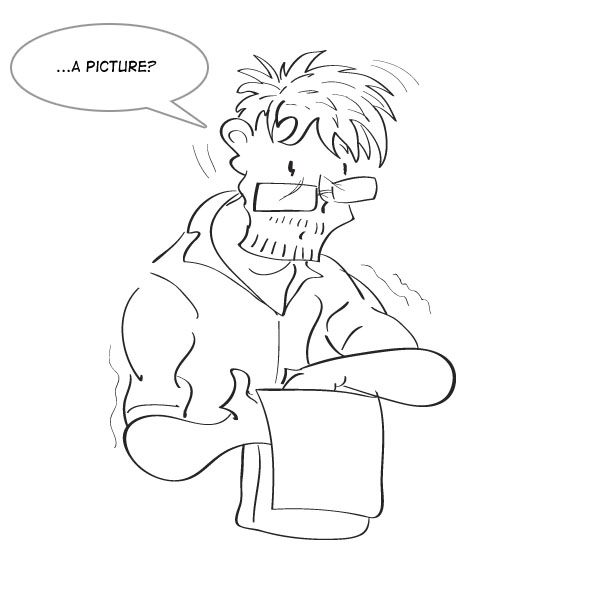 Yeah, it’s literally one of those ‘blink and you’ll miss it’ situations. We were out of wind just by that fraction of a second. And I just thought…’damn Shinkansen are awesome!’
Nothing else was planned for the evening, so the only question on our minds was ‘what’s for dinner?’. I knew however exactly what I wanted for dinner: 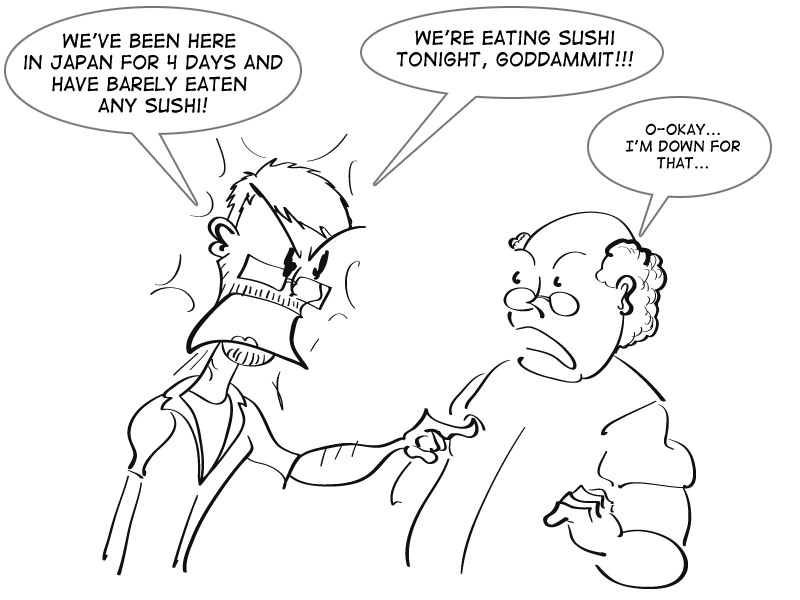