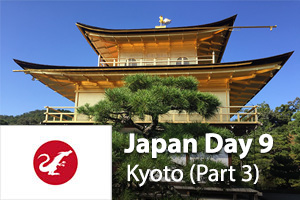 Brighter than a thousand suns

I woke up feeling slightly sad. Because on this day, back home in Belgium, the ‘Jenever-feesten’ have started. An annual weekend filled with celebrations of…well… Jenever (if I have to believe Google, the English translation is ‘dutch gin’, which is a silly name). Because my city, Hasselt, being recognized as thé Jenever-city of Belgium, there are fun and crazy festivities to be had all weekend long. It’s something my friends and I always look forward to every year. And now, this year I’m missing out. Because I’m in wonderful Japan… goddammit. Talk about first world problems! Originally, I planned to discover a jenever of some kind in Japan on this specific day, but now after spending a week in Japan I’ve learned that the drinking customs are totally different than in Belgium. I was confident that finding a spirit even remotely close to jenever would be impossible in my time frame. So I just settled for putting on my jenever-feesten-socks. In the evening I did receive a Facebook picture from my friends back home, all showing off their own jenever-feesten-socks in group. Gotta love them! 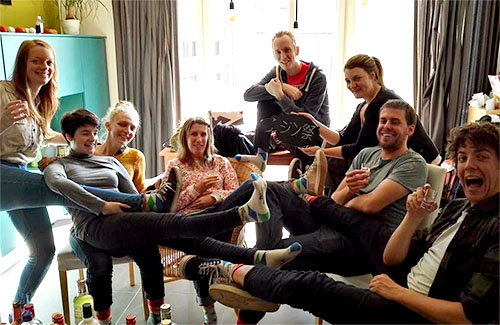 Today was our first ‘day-off’. Well technically. In our tour group, we’ve always been free to go and stand wherever we want. Our guide never said “today we all are going to…” but always said “I purpose we do this, for those interested…”. And there have been a few times where a couple or two took a pass and went off to go visit something completely different. And many a times we were free to wander off for several hours. The only thing really mandatory was being together when catching a train to the next city/hotel. A ‘day-off’ however is when the guide himself had totally nothing planned. He would be off fixing train rides or hotels for the upcoming days or something like that, leaving us to fill in the entire day as we pleased. He did helped out the day before by suggesting what is worth visiting on our day off and how to get there. 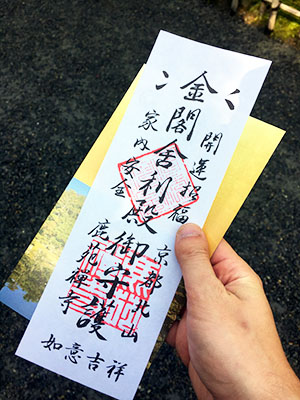 At breakfast I sighed after listening to my fellow explorers, how delightful it was for them to start the day in the public onsen. Yes, our hotel had an onsen. Small signs in every elevator (in English) explained on which floor the onsen was and what the rules are. Two rules stood out for me of course. The first being that any tattooed person is not allowed in the onsen and the second one, which said that it is not ‘safe’ to enter the onsen after an alcoholic beverage. Well that was a nice reminder…
While I had a few locations that I wanted to see in kyoto, I was open for pretty much anything. At the breakfast table, the decision was made to start by visiting Kinkakuij, the golden pavilion of Kyoto. After mailing some postcards (which apparently got delivered pretty rapidly, another Japanese mind-blow) we jumped on a bus straight to Kinkakuij. It was easy, but lengthy. Again we were blessed with lovely weather, the sky was clear blue as sapphires (actually, scratch that thought. Sapphires are kinda dark-blue’ish). The hype for this zen temple seemed legit, as there were loads of tourists and school groups at the park leading up to the temple. I dig the entree ticket, it couldn’t be more Japanese.

You might think by now “Oh god, another temple?! Is that the only thing worth visiting in Japan, temples??” and I get ya. I was getting dull of them myself, but Kinkakuij isn’t just any temple; it’s a GOLDEN temple. Jup, it’s made (for the most part) out of gold…well…not gold gold…as far as I know…it’s decorated with gold ‘leaf’…and stuff…ha screw it, it’s a golden temple! Just take my word for it. The question was however, if it would be as impressive as it sounds. Short answer: Yes. Long answer: Yeeeeeeeeeeeeeeeeesssssss! 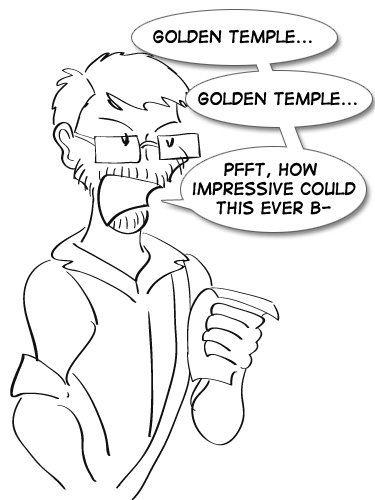 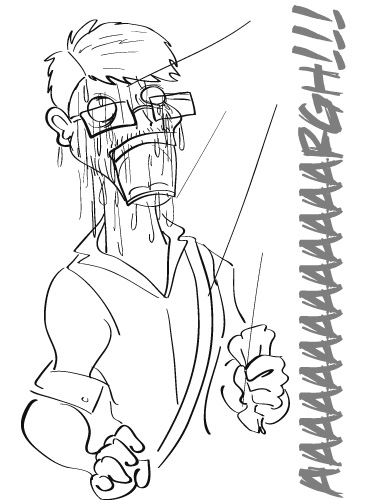 Having nice weather is obviously great, but in this case it added so much more to the experience. The sun was shining bright and made the golden temple glow like glorious white light. Insanely majestic. The temple is also located at a large lake, creating a wonderful reflection in the calm waters. Absolutely beautiful. The strange thing though is, I wasn’t able to capture the effect of the light on camera. Of course, I’m only dealing with a smartphone camera so I’m very limited, but I was surprised how the reflecting bright lights of the golden walls were almost completely rendered out when taking a photo. On the web you can still find some pictures that resemble close what the experience was, but not quite. The closest you’d find (if you’re lazy like me and only checked the first few google images) are photos that show the golden walls to be more white than gold/yellow. That’s kinda what it actually looks like. But what the heck, I was still able to make some wonderful pics though. 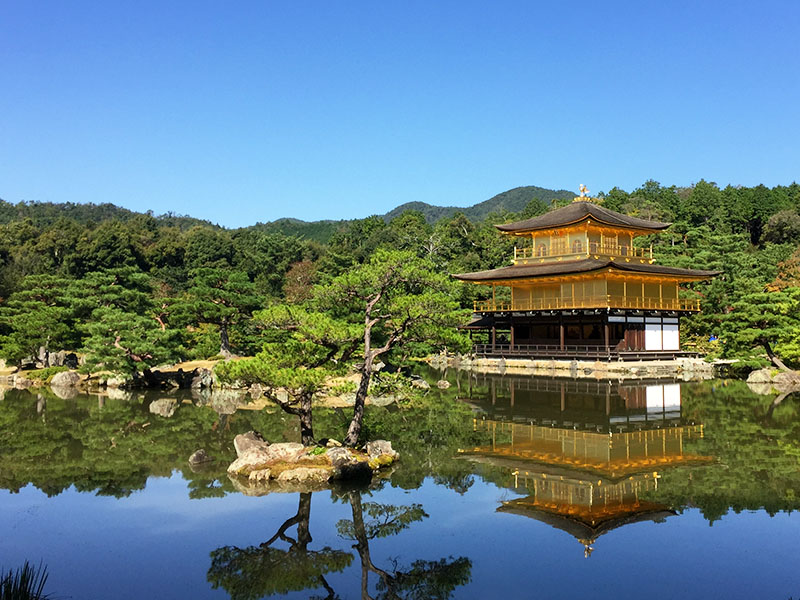 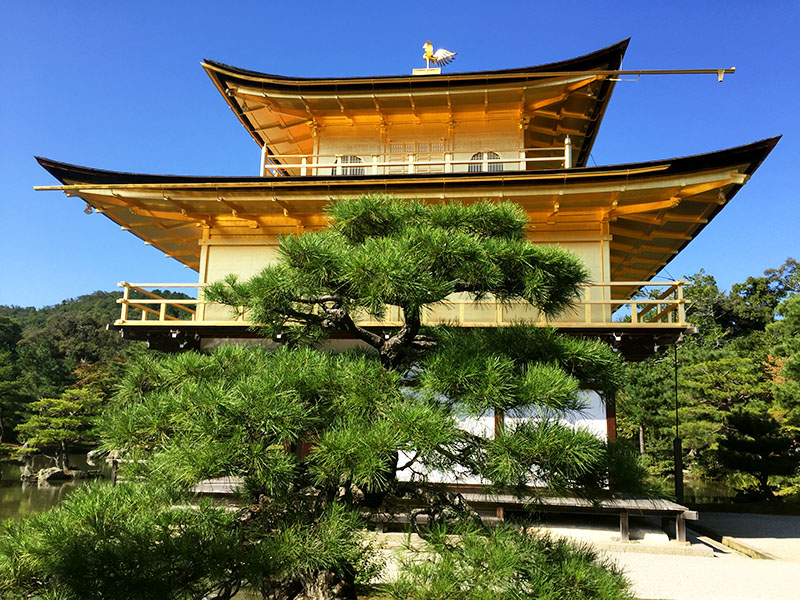 The building is incredibly well-kept, considering it has been rebuild several times over the centuries. Originally the temple was a retirement villa, how pimp is that?! I don’t think much about my own retirement, but I sure can learn a thing or two from them Japanese folk. The surroundings were absolutely wonderful as well. Even after several days of seeing the nature of Japan, it doesn’t get boring or repetitive. Nearby was a lovely-looking tea garden, with bright red chairs, tables () and parasols. In hindsight, it would have been nice to sit there and enjoy some tea in the sun but we were too paranoid about our schedule of all that we wanted to see (me in particular, but we’ll get to that) so we didn’t want to waste any time. 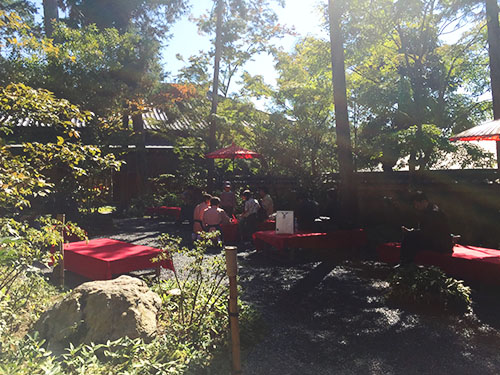 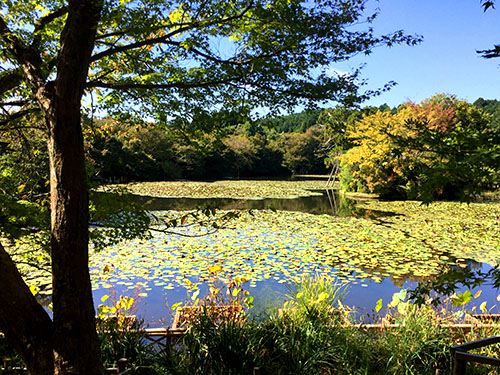 Our next stop was the nearby Ryoaji Temple, better known as one of the more popular zen gardens of Kyoto. It was here where my mood suddenly started to shift. For you see, a ‘zen garden’ is considered to be a place of enlightenment or peace, or you know…silence! While that is not the exact definition of zen, peace and quiet is something that is often associated with zen. Well there was none of that to be found at the Ryoaji Temple! Noisy crowds, running up and down, complaining and sighing as shoes constantly had to be taken off at the entrance, it was chaotic. It had the same atmosphere as the Kiyomuzudera Temple from a few days ago, though on a smaller scale. I was kinda surprised however to see the stones at the famous ‘rock garden’ part to be remain perfectly untouched and not molested by ignorant foreigners like ourselves. Same goes for the ‘gravel’ lake these stones bathed in. The uncanny ripples were a thing of beauty. 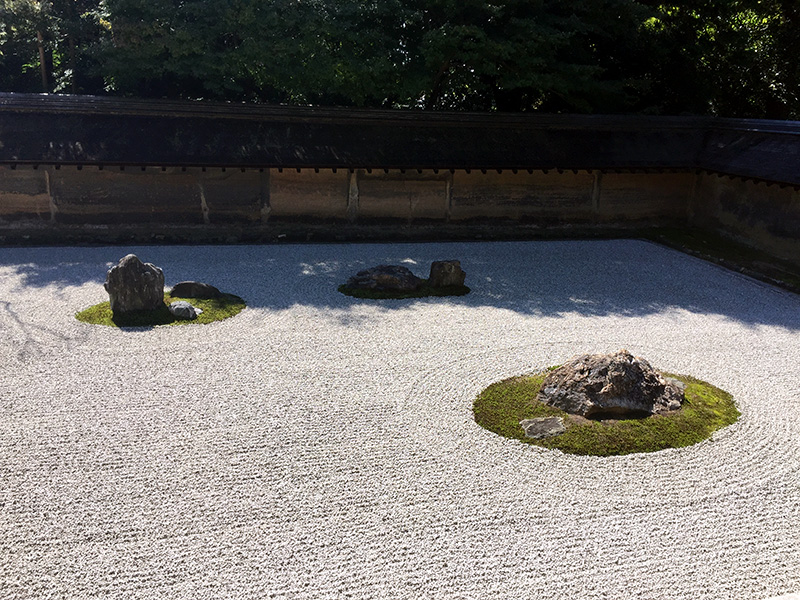 But alas, I couldn’t fully enjoy the glory of the Ryoaji Temple due to how crowded it was. For being a place of peace, it wasn’t really a place of peace. So if you want to find a good zen garden, I’d suggest searching a bit farther beyond just the popular ones.

Afterwards, we headed out to the Kyoto Imperial Palace. The old residence where ages ago the imperial family lived, now transformed into a park. When arriving at this location, I learned a very valuable lesson about traveling: bring a hat! The surroundings of the palace were large, broad gravel paths (more like grey plains) and with the sky still being as clear as ever, we got the full force of the sun reigned down upon us. In no time I was feeling light-headed, and walked as much as I could in any shadowy spots available.
Entering the imperial palace complex was surprisingly better handled than the Ryoaji temple; There was a limit to the amount of people allowed in to explore the palace, so you’d have to wait in the nearby tourist shop with maps, brochures and videos all about the Kyoto Imperial Palace, like a small tease of what is to come. The waiting wasn’t all that long and I was happy to get a breather from the bursting sun. 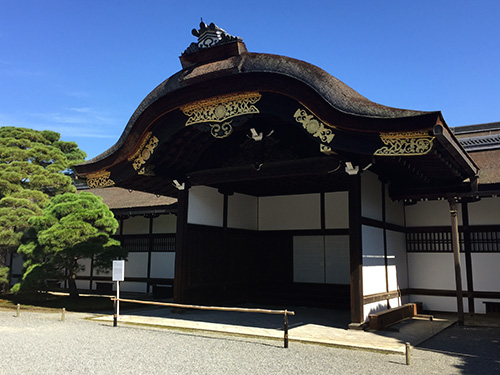 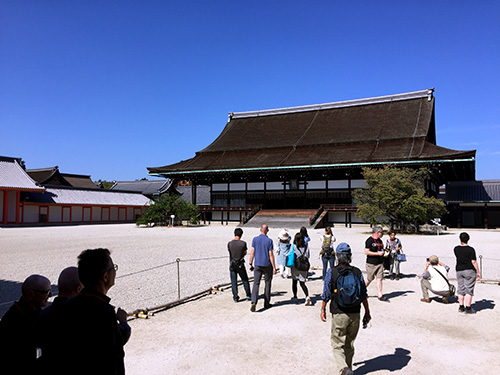 Once through the gate though, I didn’t get what all the hype was about. Everything was massive, I’ll give it that. And more peaceful than the zen garden (yeah sorry, I’m still not over that). And sure, it’s a nice thought to imagine what it would be like to be part of the imperial family all those centuries ago and to live in such a residence. But like most of the historical buildings we’ve visited so far, this too was reconstructed over the ages many a time and I wasn’t completely sold on the idea that the palace looked exactly as it was hundreds of years ago. You also couldn’t go inside of the buildings, and much of the areas were restricted. But the sun was probably just getting to me, making me care little about the history of this place and more about where I could find some more shade. The park environment around the palace was a lovely change of pace though. Once again Japanese nature at it’s finest. 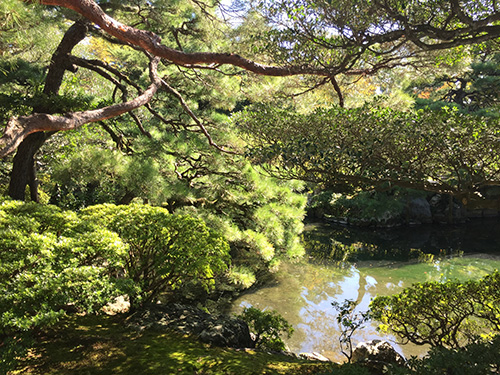 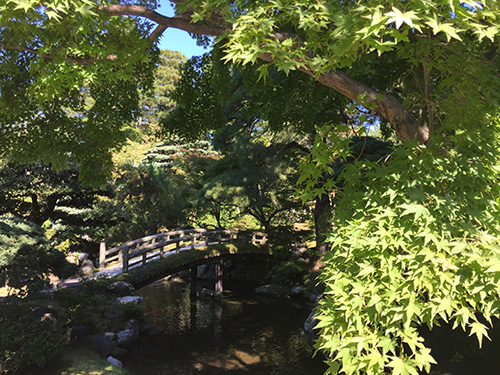 Yeah, I’m sorry I can’t be more enthusiastic about these experiences. I think that because we started the day with something so grand and wauw, that anything that came after it just felt sorta disappointing. But I am also a person who isn’t too keen on going out all tourist style. I wanted to see more of Kyoto as just, Kyoto. But then again, Kyoto has so much to offer in terms of historical monuments that you just have to dive into it. At any rate, Kinkakuij comes highly recommended! The rest is up to you (aka, just visit Kyoto dammit!).
Once we were done with the Imperial Palace, we couldn’t really decide to what our next stop would be. There were some places that I really wanted to see so we eventually went our separate ways for the remainder of the day and we would catch up at dinner time. And where exactly did I go? Well tune in next time to find out! (Cliffhanger!)