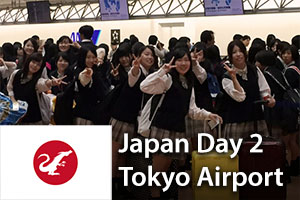 After arriving on the airport of Nagasaki, we’ll take the bus that will bring us to the main city of Nagasaki within the hour. On the long terrace, with a view over the port, you can enjoy a wonderful dinner. The local speciality Shippoku comes recommended, but you can also just have delicious sushi. We’ll be staying the following two nights in a comfortable hotel.

It was already evening by the time we’ve arrived in Nagasaki, haven’t seen a lovely terrace with a view over the port. I ‘think’ I ate some Shippoku? The hotel was indeed comfortable.
Dang, I’m making this sound way more negative than it actually was…

While I’m against taking any sort of medication for almost no reason, a strong sleeping pill comes recommended when you take such a long flight. I believe I’ve barely slept at all! After a meh breakfast and some meh coffee, excitement was in the air (no pun intended…or maybe there was?) when the announcement was made that we’ll be arriving at Tokyo Airport shortly. Confirmation of that quickly followed when I peeked out the window: 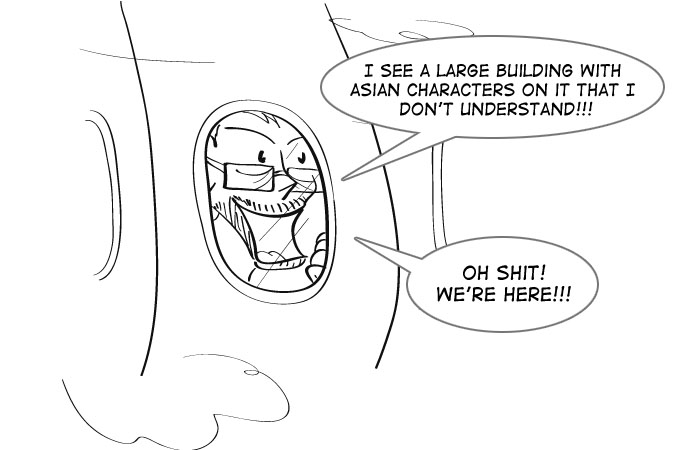 After that lovely discovery, landing felt like an eternity. Excitement was running through my veins as I kept thinking: “Holy shit, I’m actually in Japan…I’m in Japan!” One bumpy landing later, and after being welcomed at the gate by two lovely looking Japanese ladies, one holding a sign out for someone from the west, the other from the east, judging from the characters on the signs, I could finally stretch my legs in the land of the rising sun. 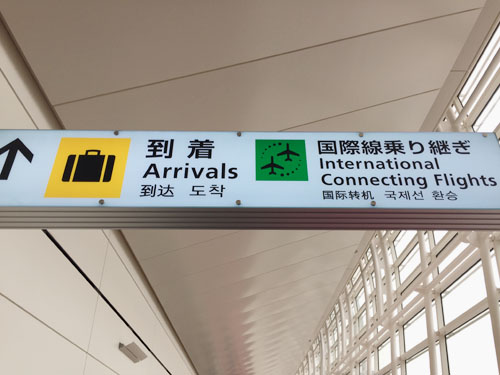 Welcome to Japan, where you don’t have to worry about finding your way around, because every sign is translated (to English, sucks if you’re like…French or something). The airport of Tokyo wasn’t exactly the futuristic spectacle I’d hoped it would be, especially after seeing a place such as Schiphol. Actually, the airport looked kinda dull at first. Much like the weather outside. The sky was grey, it was rainy and yet I couldn’t care less. I was in Japan, and I was happy.
I was also quickly introduced to the totally different mentality of the Japanese people. I was searched in Schiphol and now again in Tokyo, and the way the search went was as different as day & night: 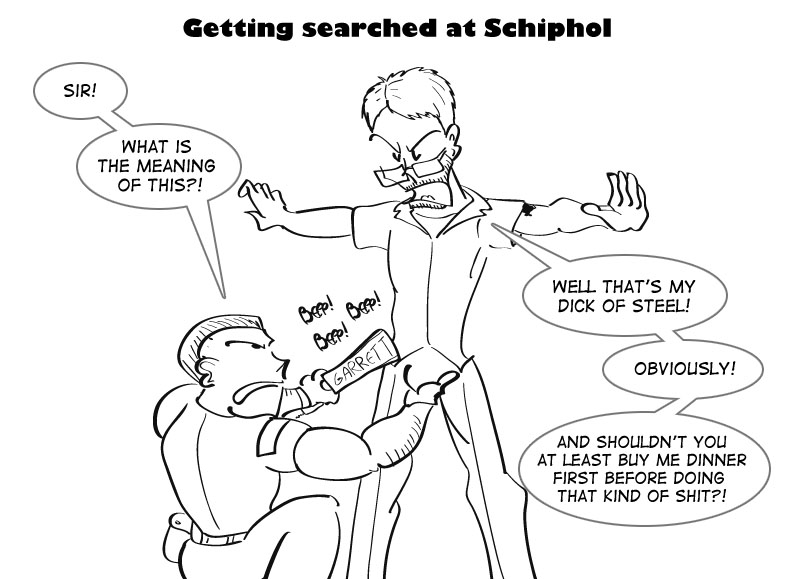 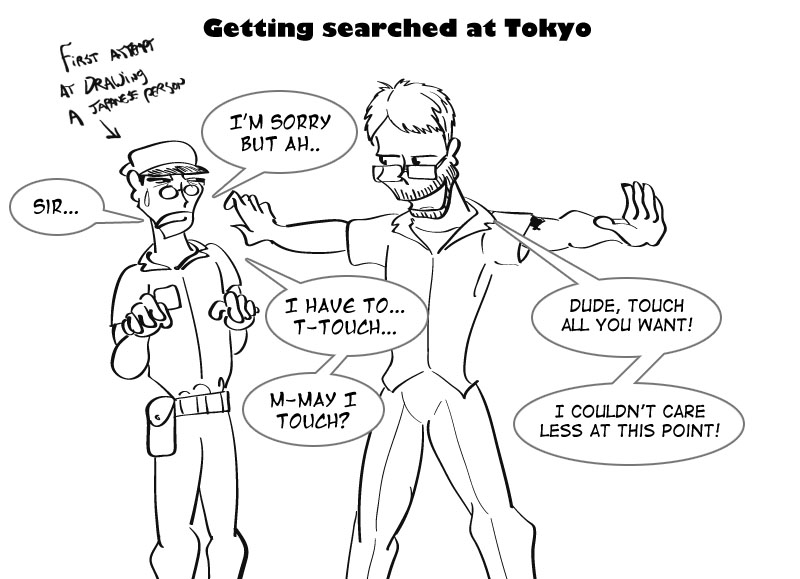 Another awesome moment occurred when we entered one of the main areas (filled with food & gift shops like there’s no tomorrow) where I saw a huge group of Japanese schoolgirls, all gathered to check in. I tried to take a picture without them realizing it, out of fear that they might be annoyed and embarrassed by it. However, the entire opposite happened. As soon as one of the girls spotted me, she instantly called out to the entire bunch to get into position for the picture, so I got this as a result: 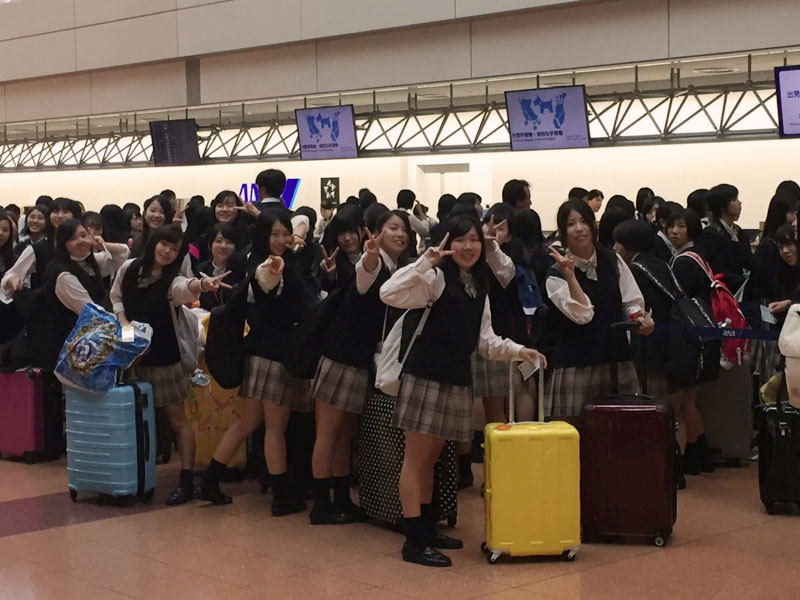 No shame what so ever. I could learn a lot of these gals.
Because our flight to Nagasaki was so ‘wonderfully’ organized, we had loads of hours to spend here at the Tokyo Airport. By this time I’ve already met several more good people of the Sawadee group (and so it came to my knowledge that our guide would be waiting for us at our final stop, in Nagasaki) and there was some fun to be had while exploring all the shops. Every single shopkeeper did an extended greeting with the bowing and everything, but it kinda made me feel like a jerk for not buying anything. But sorry, I ain’t gonna spend 1500 yen on some random cake! 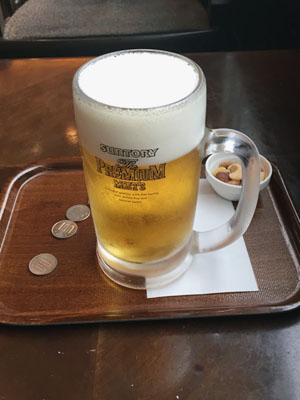 I eventually found a lounge bar to relax and let it all sink in. And I enjoyed my first of many beers while staying in Japan. I didn’t question the price of 700 yen at first, because like any other airport, prices there tend to be quite high. But I’d come to discover soon enough that the price for a beer elsewhere won’t be so much cheaper.
It was a special and sort of unusual feeling to finally realise you’ve reached ‘that’ country where you always wanted to go. I hope that everyone would enjoy that same experience, wherever they may go. It makes you feel all jolly inside!

After the well-deserved beer I decide to rest at our gate. The jetlag didn’t feel too heavy on me, as we sorta travelled into the future…if that makes any sense. Still, a nap was in order, and apparently in doing so I was able to entertain some Japanese families, as their kids found it funny how this western person kept bobbing his head.
Another funny discovery of Japanese decency was made as it slowly became time to aboard our flight. At the info desk a worker kept doing his best to call out a certain person, asking him(or her, couldn’t really tell by the name) to come check his/her luggage. Thinking the luggage may be of one of our Sawadee crew, we eventually asked what the issue was. Apparently the only issue that there was, was that the worker wanted to inform the owner that one of the wheels on the luggage was ever so slightly damaged. Such a minor issue that the owner was already probably aware of, yet this Japanese fellow almost panicked for not being able to report the matter.

Flying in a Japanese airplane isn’t much different of any other plane. Announcements were being made in both English & Japanese, and the (good-looking) flight attendants were pretty fluent in English, despite their high-pitched accents. If I wasn’t sleeping during the flight, I was entertained by the screen in front of me, which was running all sorts of Japanese commercials about what to see or to do in Japan. Of course I couldn’t understand a thing, but it was funny to watch as how over-the-top and kiddy-like most of the commercials were. 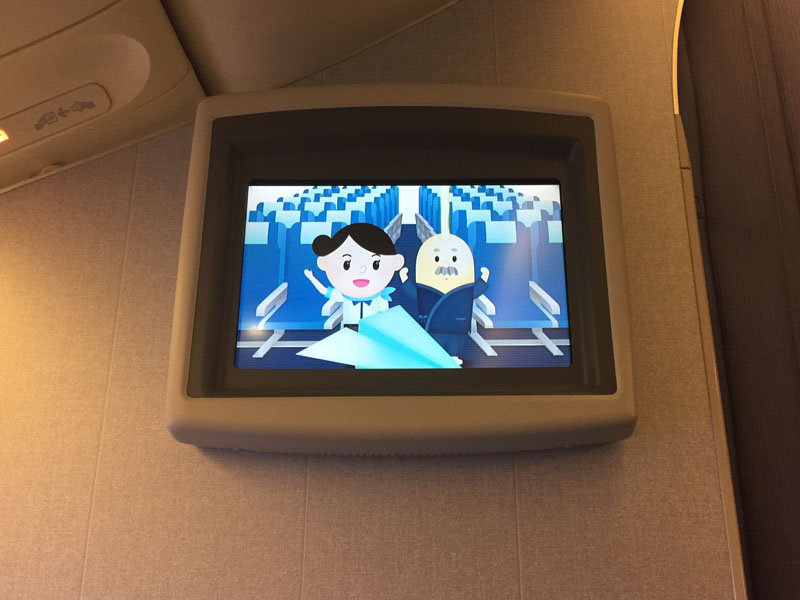 It was already dark once we finally landed in Nagasaki, and after collecting our luggage we’ve met with our tour guide Mitchell, holding up a Sawadee sign as we left the place. All was well. 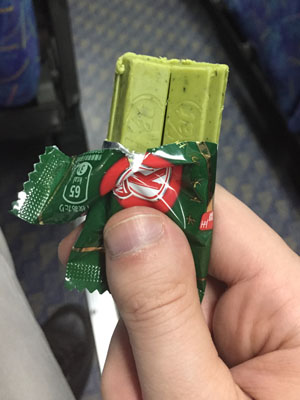 After a short introduction, we went on the bus that would take us to our hotel. I’d hope to see many bright colours in the evening, but Nagasaki isn’t exactly the light show that say, Tokyo is. On the bus, we were treated to some information sheets about Nagasaki, along with some Green Tea Kit-kat. And yes, it tastes exactly like Green Tea Kit-kat.

Because we were all so worn out from our flight, the only plan for the evening was to dump our luggage at the hotel and have dinner together to get to know each other. A fun surprise was in store for me though when Mitchell was handing out the room keys, as the person who I was going to be sharing the room with, was absent from the trip. 2-person room, all to myself!
After a ‘hilarious’ shower that reminded me of a scene from ‘Lost in Translation’, because yes the shower heads are placed that low in Japan, we all went off to a local restaurant that our guide knew of.

The customs within these restaurants are quiet something, as we had to take our shoes off as we entered, and placed them in little lockers where the keys are…pieces of wood. I kid you not, your key is a large piece of wood, with a Japanese symbol on it.
Also you normally just sit on a small pillow at a low table, at least if you wanna go all-out hardcore Japanese style. For us ‘tourists’ there’s the option of sitting at a low table with leg space underneath it, to create the illusion as if you’re seated Japanese style…but not really.
Our guide Mitchell is pretty damn fluent in Japanese, so he ordered all sorts of foods for us, almost like tapas. We were quickly taught that in Japan, when a dish is ready it get served, no matter how much has been ordered. So instead of getting everything all at once, it’s a small dish after another. You do get all the white rice you could ask for. 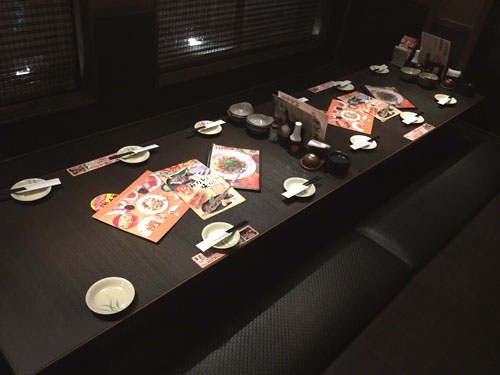 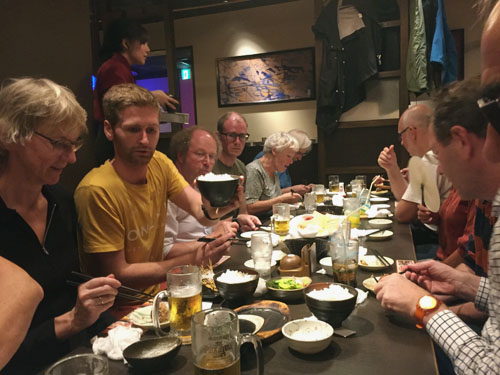 While you might expect that in Japan you enjoy your food in silence, it’s actually anything but that. The large table next to us had a whole bunch of Japanese people, all laughing and cheering in all sorts of Japanese. It wasn’t annoying though; it was actually pretty fun to hear them enjoy themselves.
The hashtag #foodporn wasn’t yet engulfed in my mind, so alas I didn’t take any specific pictures of the many kinds of food that was presented before us. All I remembered was that I ate it, and liking it! As a small joke, Mitchell also ordered some fries for us Belgian folk. I can easily say that those weren’t all that special. Nothing beats Belgian fries.
We had a good time, our bellies were filled and it was time for a goodnight sleep. I was finally here, in Japan. And the next day our trip can properly start, with me exploring the city of Nagasaki!

Join me next time!