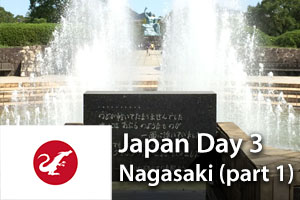 During our trip we’ll be travelling mostly by train, because it’s the most comfortable way of transportation in Japan. We’ll be using a 14-days Rail Pass. Do you want to get out of the city? Take a train to the theme park ‘Huis ten Bosch’, here are real life cultural highlights reconstructed out of the Netherlands. It’s very interesting to see how Japan celebrates the holidays “like we do back home”.

Why would I go to a theme park that looks like everything back home? I wanna see Japan stuff. Nagasaki does have a lot of unavoidable European influences, like the Glover Garden. But also a Chinese temple! And of course lots to see about something that happened there in 1945…hmmm.
Oh yeah, and we did receive our Rail Pass, yeh…

The Japanese city with some Europe on the side

There was a slight “oh, it wasn’t a dream” moment when I woke up and realised that I wasn’t in my usual bed back home but in that of a Japanese hotel. Neat…
I wish we had some sort of an introduction course when it comes to a Japanese breakfast, as I felt clueless on what to eat in the hotel that morning. You see all kinds of things like tofu, slices of fish, white rice, funky-smelling soup and other stuff that doesn’t even look eatable. But there was also just egg & sausages, mini-croissants and tasty yogurt, so I took the safe route and this was the route I would almost always take when it comes to breakfast here in Japan.
After breakfast we got an explanation on what to see and to do during our short time that we’re here in Nagasaki. We lucked out because the Nagasaki Kunchi Festival was going on at the time, so we were in for a treat (but I’ll get back to that later). We would gather in the late afternoon to head out for Mt. Inasa, which has apparently one of the best city views in the world! Promising… Then we were let off our leash and set free to explore Nagasaki at our leisure. And this is how I pretty much wandered around ‘at my leisure’: 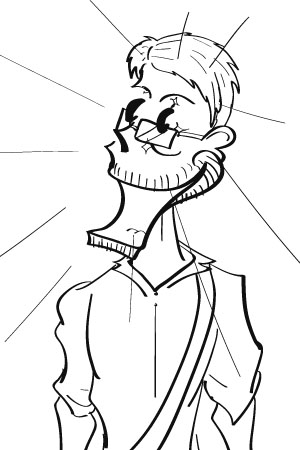 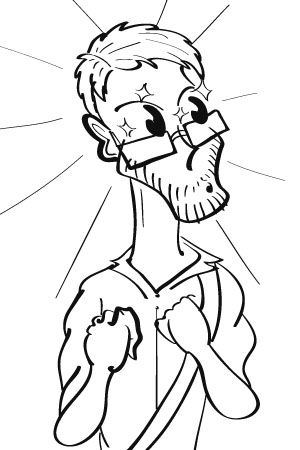 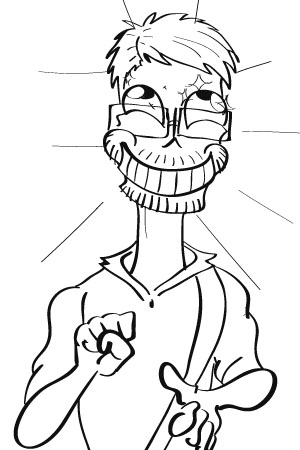 A clear blue sky and a burning sun now replaced the cloudy weather we had yesterday. Goodie. I won’t go into specific details about what Nagasaki is all about, you can already find plenty of sources like this one that will help you far better than I ever could. Hell, I’ll refer to Japan-guide probably a lot during these posts. But the most important thing you must known, is that Nagasaki is one of the two cities of Japan that has been bombed during World War II. The city has since been totally reconstructed, but it doesn’t shy away from reminding every visitor of what has happened there.
When I was in Berlin, we were joking a bit about ‘don’t mention the war’ but that joke was quickly rendered pointless, as the great city itself mentioned it non-stop. I wasn’t a fan of visiting many cultural aspects of that, because it just left me with a sad feeling in my guts. War is disgusting. So here in Nagasaki I kind of wanted to ‘dodge’ those similar experiences. I’m in Japan, I’m happy! Why should I go visit stuff then that makes me sad?! So I head out to the Glover Garden…or so I thought. Getting around in Nagasaki is literally straightforward, as the main city is basically a huge street that goes on for miles and miles, with the train station being the central point (where also our hotel was nearby). You’d either go ‘up’ the street, or ‘down’. I thought I was heading into the direction of the garden, but apparently I’m a dumb ass and I went into the opposite direction and ended up at the Peace Park, ironically one of the places I wanted to avoid. 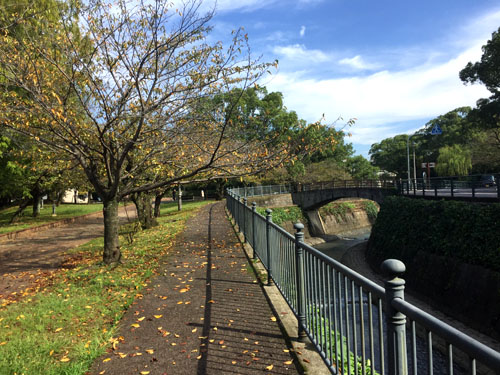 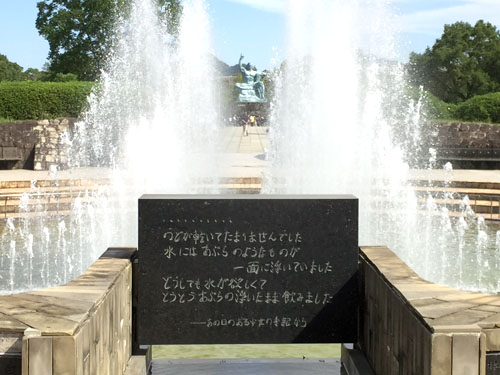 The park is wonderful however, especially now since we were blessed with such lovely weather. I also was there pretty early (9 o’clock-ish) so there were barely any people. My fellow sawadee buddies would later inform me that they went in the afternoon, and the place was packed. So if you wanna go, get out of bed early!
You can gaze at an abstract monument that at first didn’t make much sense. That was until you notice all the white circles around it, getting bigger and bigger. Like it symbolises some sort of…impact. That’s when you realise you’re standing at the exact spot where the bomb landed. And I gotta say, that’s a messed-up feeling! 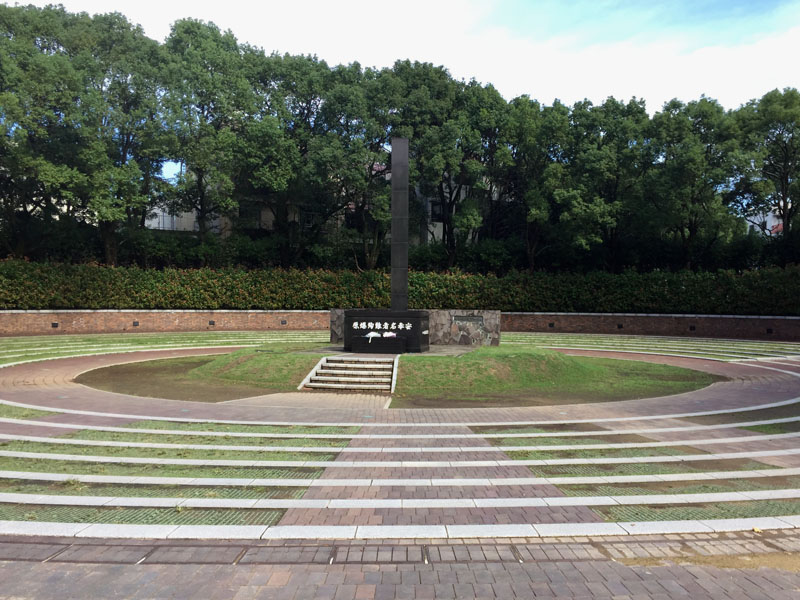 Near the monuments you’ll still find many flowers being placed to this day, and many old couples who come by to show their respect. Continue further and you can get to the upper level of the park by a few escalators. It was kinda funny to use them, as every escalator came with it’s own Japanese female announcer voice (probably saying things about safety rules or something, I dunno…) but since the escalators were so close together, you would hear several announcements at the same time, as if it was a girl band trying to rehearse.
On the upper level you get the second part of the park that is filled with many more monuments, many which were donated from other countries as peace tokens. And of course you have the famous Peace Statue at the end. This is like the typical image you’ll find of modern Nagasaki. I always thought that seeing a picture of any piece of art would be just as good as just seeing it in real life. I can honestly say now that that is not the case. Because well, the Peace Statue is huge! 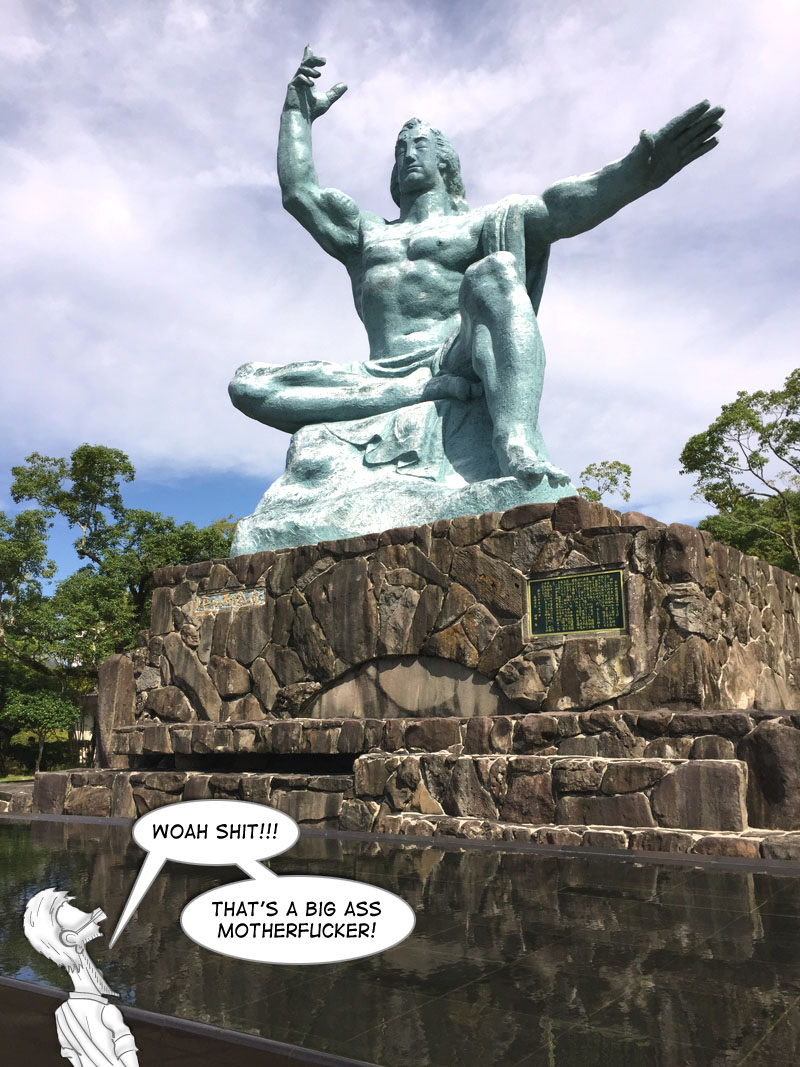 I didn’t see that one coming. Like goddamn, you feel so insignificant when you stare that thing, as it stands there, being a badass and all, symbolizing the past, present and future of Nagasaki (the arm pointing up represent the bomb aka the past, the extended arm represent peace aka the future, and the statue itself is the present…yeah that’s my theory on it! I’m smart smart…).
After the park I went around and explored the neighbourhood, where I encountered a white stray cat that was looking to get some affection from a cute Japanese couple. The couple asked me (in Japanese, they didn’t seem to know a word of English) to take a picture of them with their phone. It was an awkward but funny scenario, because the phone kept switching off as I tried to make a picture. My brain then decided to bail on me, leaving me with only random sounds to communicate to the couple. But hey, eventually they got their lovely photograph, minus cat (the white cat was too impatient to stick around). 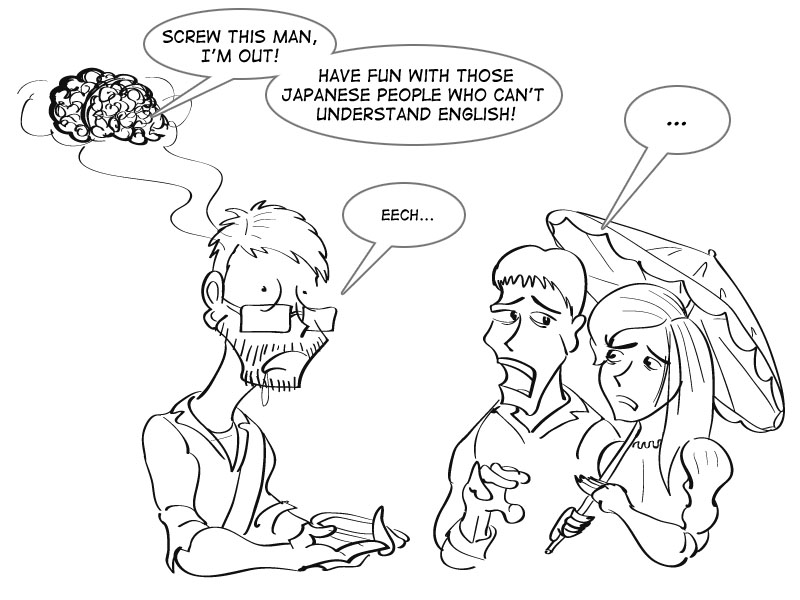 I was happy that I misread my map and ended up at the Peace Park. Even though, as expected, there is a presence of sadness there that you can’t avoid (the information signs are anything but subtle about the horrors that has happened there), it is a special place to visit and certainly worth your time. There’s also the Atomic Bomb Museum nearby if you want to learn more about the bombing. But now, we’re really off to Glover Garden. 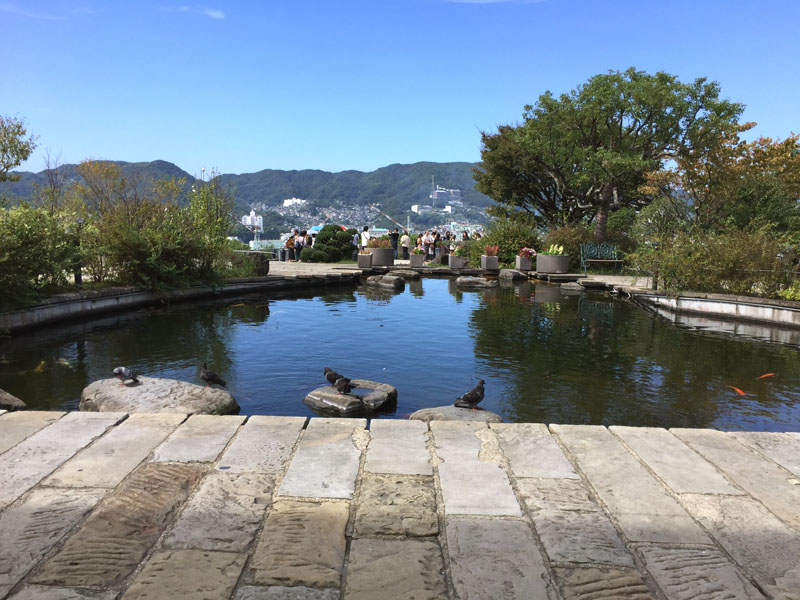 If I didn’t feel stupid enough already about going into the wrong direction, Nagasaki had to go and remind me of it, and slap me in the face with it for good measure. Once I reached one of the (many) tram stops, I discovered that there’s a whole information board there, in full English, explaining how to easily reach the popular destinations of Nagasaki. And these boards are on every, single tram stop. Now that’s idiot-proof. I hopped on the proper tram, slightly laughing to myself as I was the only western person on it, and off we went to Glover Garden.
Just getting to Glover Garden is exciting enough, as you not only take trams but elevators as well. You get a nice city view as you walk higher and higher, along with more stray cats that gaze at you uninterested. I didn’t know a thing about the Glover Garden, the word ‘garden’ just triggered me to go visit it. Apparently the Glover Garden is a park where originally in the 1860’s one Scotsman named Thomas Blake Glover, who not only had a badass name but also was such a legit badass as a merchant, that he was just like: 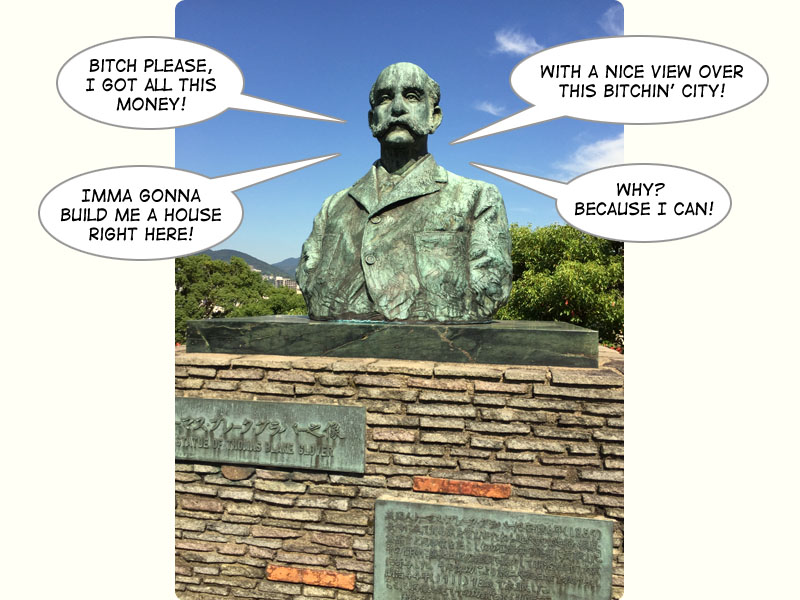 And holy tarte tatin, what a lovely place! The park is a great mix of lovely nature and beautiful European houses. What started with only the house of Glover, evolved into a tiny village as more western folk called dibs on an epic house in that area. A fun thing you can do at the Garden, is getting dressed up in clothing from that period to stroll around in. I saw several Japanese gals wander around like that. Cute… Another thing you can do, is look for the ‘hidden heart stones’. Legend has it that among the regular stone paths, there are two hidden heart-shaped stones. Touching both of them would make your dreams of love come true. So naturally, I went looking for the stones, and found them (not hard to find when you see a bunch of tourists surrounding it, taking pictures) 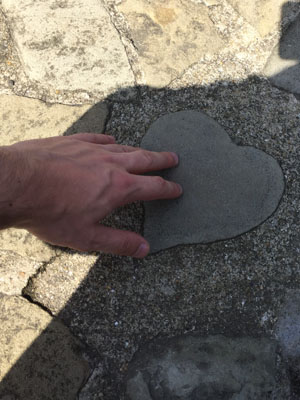 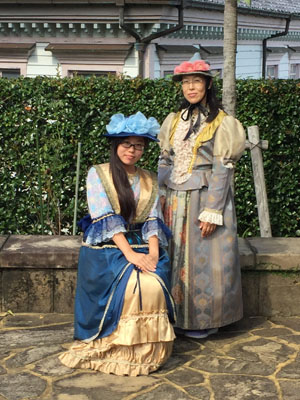 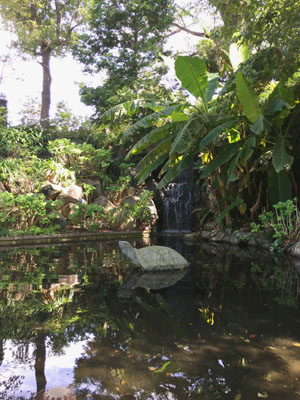 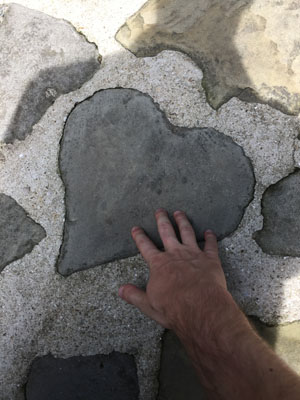 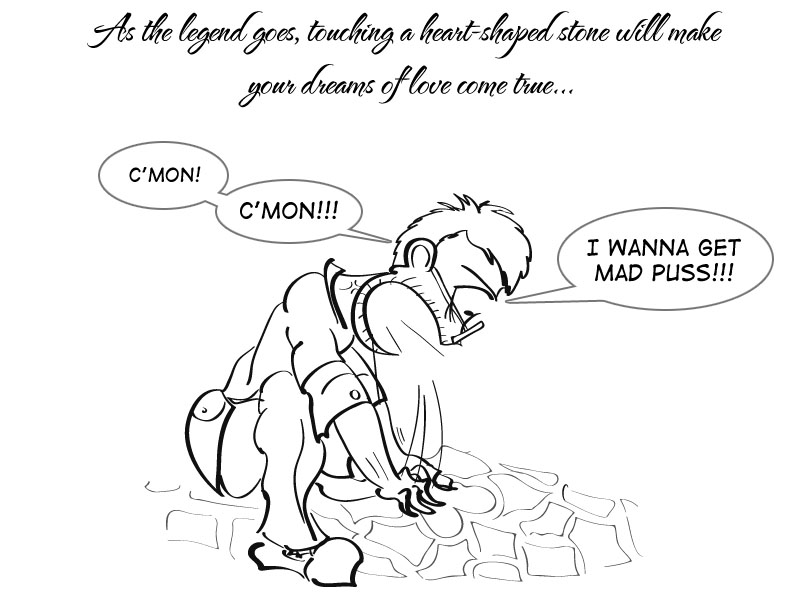 The Glover Garden has such a relaxing feel to it, and as a result I spend there what felt like a delightful eternity. After checking the time and seeing it’s too early to return to the hotel, but too late to go see another big attraction far away, I tried my luck within the area. And luck so have it, the Nagasaki Confucian Shrine was nearby. 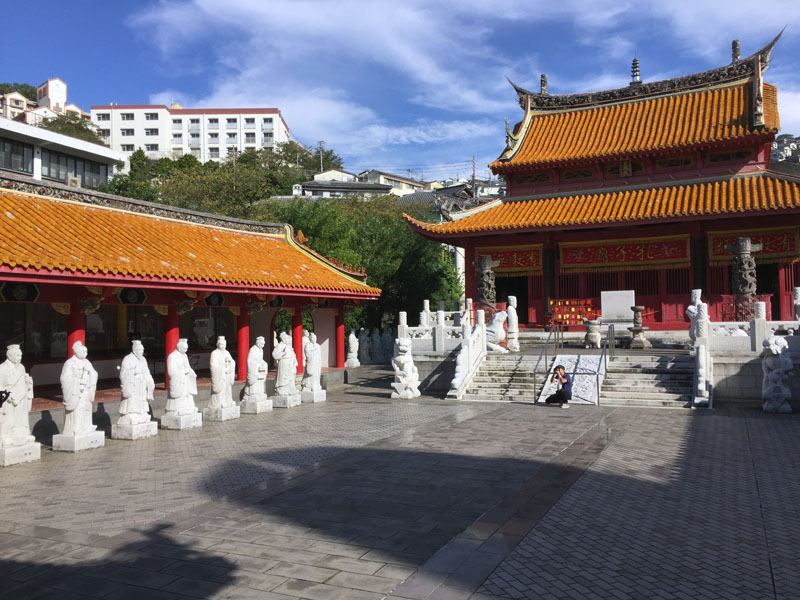 To simplify what this place is, it’s a Chinese temple…in Japan. And apparently if I must believe the brochure, the only one! It’s a strange shift to go from an European garden, to a Chinese temple…while you’re in Japan. It would have been very special to walk around there, if I wasn’t so clueless. For this place only has an English brochure to rely on, and nothing else. You can visit a museum in the back with many marvelous wonders, but all the information boards are Japanese (or Chinese probably) so as a western dork, you don’t have a clue what you’re looking at. So I wasn’t surprised to only encounter Japanese folk here.
I felt a little disappointed after the luxury that was the Peace Park & Glover Garden, but my visit did end on a high note. On my way out, there was apparently a photo shoot going on of a cosplay…more specifically a Street Fighter cosplay! And since I have Street Fighter tattoos on my legs, I guess you could say that makes me a fan. I tried to sneak in for a picture, as not to disturb them. They spotted me soon enough, but invited me to come closer and take a proper pic. Awesome! The photographer then asked “doyouknowthischaractah?”. After figuring out what he said, I cheerfully replied “Jah, Juri!” and I was rewarded with a small Japanese cheer. 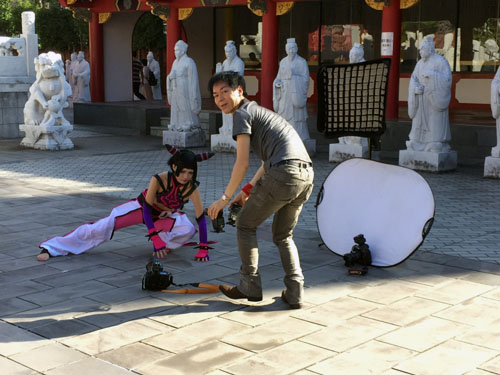 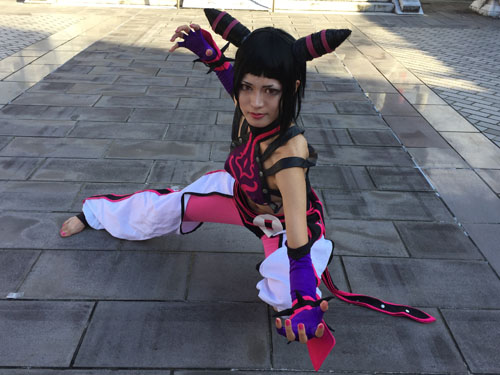 I returned to our hotel, in a good mood and the awesome theme of Juri ringing through my head. I didn’t even question why a Japanese cosplayer would do a shoot in a Chinese temple, while the character Juri is clearly from South Korea. D’uh!

We leave it at here for now, for the evening in Nagasaki is worth a full post of it’s own.