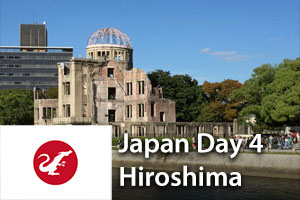 With the fast Shinkansen, we’ll reach in about 4 hours Hiroshima, the city that was destroyed in 1945 by an American atom bomb. A visit to the atom bomb museum, the Peace Memorial Park and the Dome are a must, the Dome being one of the few buildings left standing after the bomb struck. They will not leave you unaffected. We’ll be staying the following two nights in a comfortable hotel.

Shinkansen is da shit! Like seriously! So fast but so comfortable! The best thing ever since sliced bread! Like goddamn! So awesome! Shinkansen is ma jam! My life is complete now that I’ve enjoy the glory that is Shinkansen. Woah…

Oh yeah, and Hiroshima is nice.

Yeah I’m just gonna skip straight to it: Traveling by Shinkansen is awesome! In case you don’t know, Shinkansen trains are ‘bullet trains’ that travel at incredible speed. But that’s not the main reason that makes them so awesome. It’s because you as a passenger don’t even notice it: 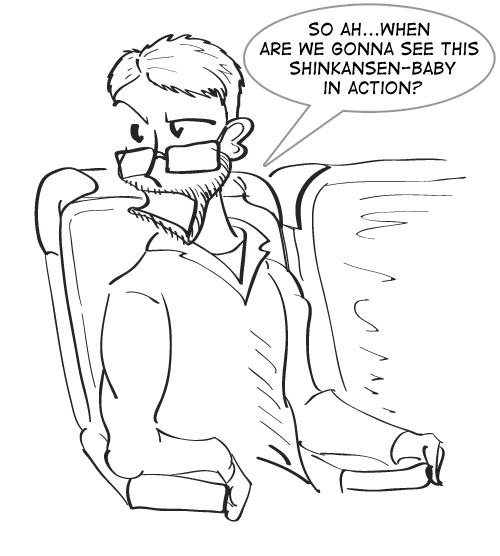 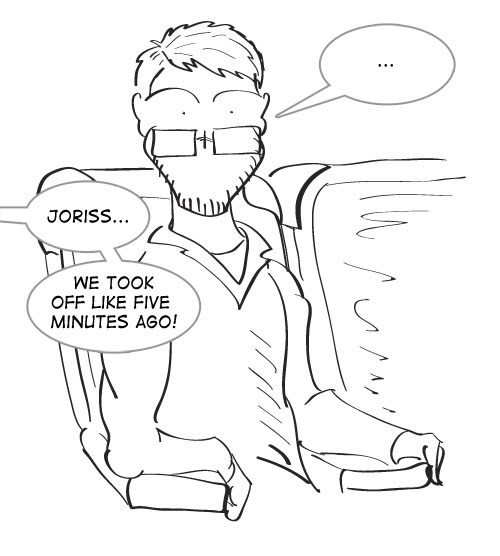 That literally happened to me. The ride starts so smooth and remains so comfortable, you’ll easily forget you’re travelling at least 300km/h. The trains also don’t take off like say the Aerosmith roller coaster in Disneyland. It’s goes ever so gently, and slowly but surely, it gains speed. Add to it that you’ll get a comfortable seat and a trolley with snacks passing through and you’re in for a delightful ride. I travel a lot by train so for me, this was pure luxury. 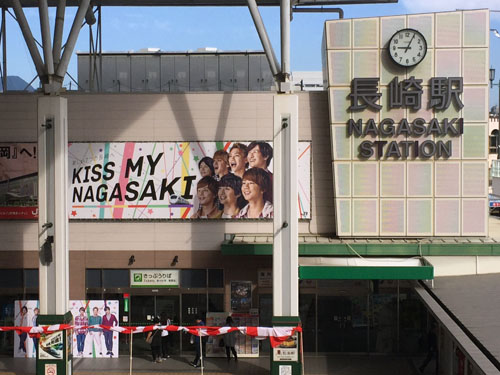 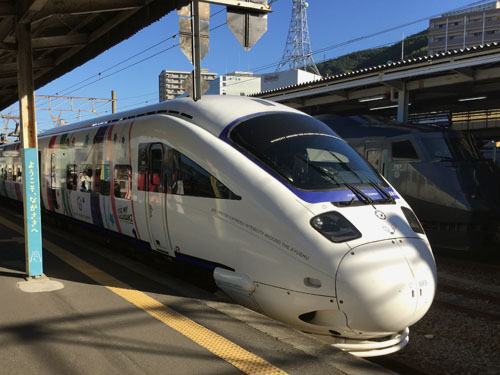 And off we went. Bye bye Nagasaki! But the ‘spirit’ of Nagasaki still remained with us for a while, well sort of. Our Shinkansen train was ‘Kiss My Nagasaki’ themed, which is…a local boy band…I think? I couldn’t find any of their music or something, so they might as well just be celebrities. The ladies sure seem to go crazy for them, because we saw several of them pose happily near our train for a picture.

After a few hours of relaxing during our train rides, we arrived in Hiroshima. Everything seems to be an upgrade from Nagasaki. Bigger & fancier. After dropping our bags at another splendid hotel, it was time for lunch. Our guide mentioned that Hiroshima is well known for its speciality known as Okonomiyaki, so he took us all to a restaurant to enjoy this dish. The place itself was actually several small restaurants all in a single building, each on a different floor. This is very much the Japanese way of things. You don’t just have ‘one’ store or restaurant at the ground floor. There’s always something to behold in every building, on several floors up, and even many floors down. As a tourist, this is kinda tough to get used to, because there are rarely English signs on the buildings. You just get flashy Japanese signs with something like ‘2F’ or ‘3B’ to guide your way to adventure. 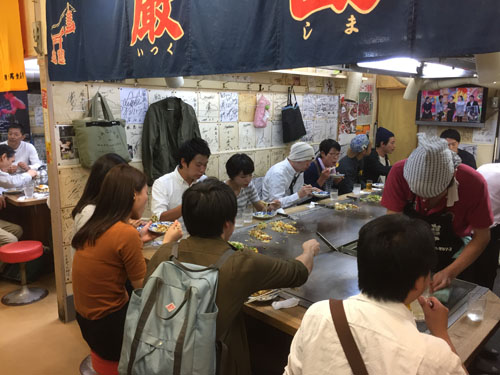 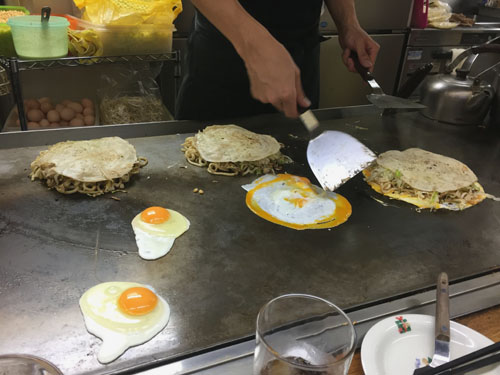 The restaurant experience was something else. You sit all close and cozy together, watching your lunch getting prepared before your eyes. It’s pretty straight forward; first they make a little pancake, then add salad and noodles (and whatever else you wanted it go with it, I choose bacon of course) on top of it, crack an egg and flip the whole bunch on top of that egg and finally flip around one more time once it’s all nicely cooked and covered it in soy sauce. Needless to say, it was delicious. 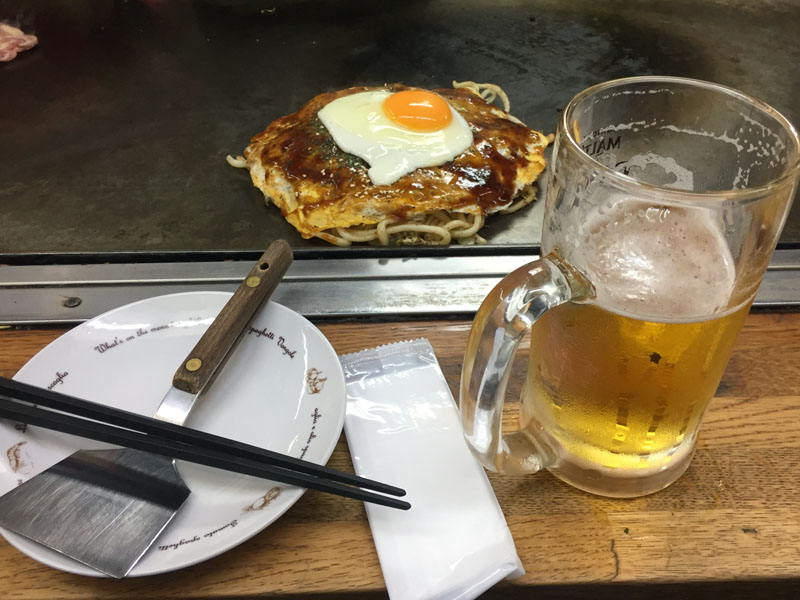 After lunch we all set out to the Hiroshima Peace Memorial Park where we were set free again to do as we pleased. The Hiroshima Peace Memorial Park shares the same vibe as the one in Nagasaki, but on a different level. The park is much bigger, for one. Instead of statues, we get more abstract designed monuments. The main highlight is the cenotaph in the center, where many people placed flowers and bowed in silence for those lost in the attack. Behind the cenotaph is the famous ‘Peace Flame’, which is said to remain burning until there are no more nuclear bombs in the world and we’re all free of the threat of nuclear annihilation (aka World Peace!). It didn’t became an in-depth discussion in our group on how long this flame will continue to burn. We quickly all agreed that the peace flame will keep burning for a long, long time… 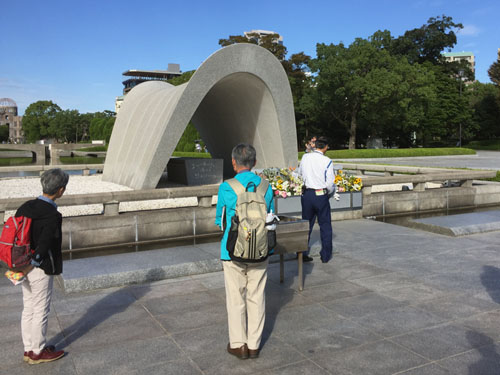 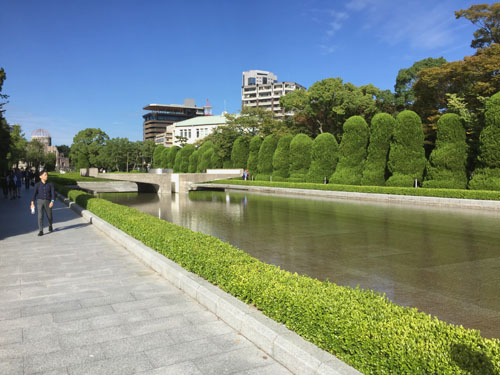 Next visit was to the A-Bomb Dome just near the park. Somebody really has to explain to me the value of seeing ruins like these, because I just thought that it reeked of death. I wasn’t amused seeing something so impact-full, and I was even upset when I saw a bunch of tourists cheerfully take a selfie in front of it. Why?! 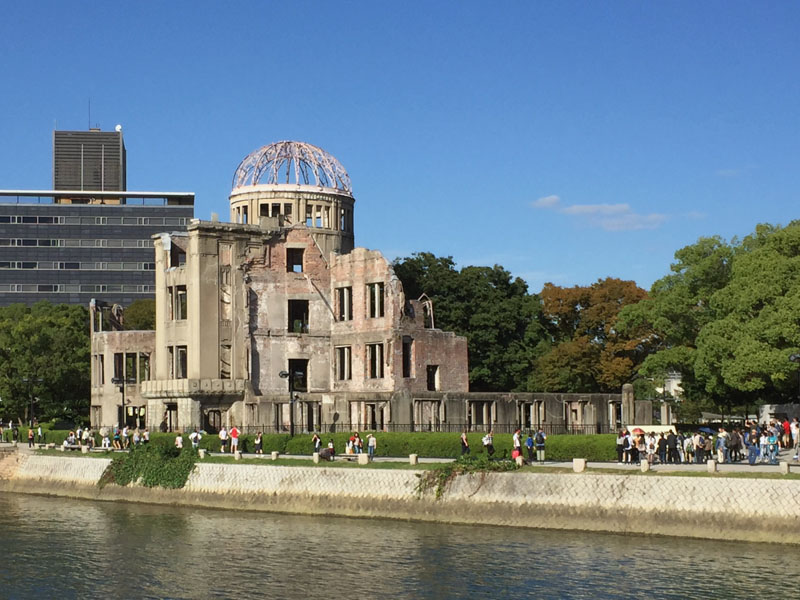 Most of our group paid a visit to the nearby Memorial Museum as well, but like in Nagasaki I took a pass to this. Screw learning more about war and devastation. I would later reunite with them at the Hiroshima Castle.
During my stay so far, Japan had not yet engulfed me into their awesome history of unique architecture, samurais, monks and dragons, but that all changed with the visit to Hiroshima Castle. The keep was destroyed when Hiroshima was bombed, but it has since been reconstructed to nearly perfection, giving it a feel of traveling hundreds of years back in time when you enter through it’s walls. The chambers inside the stronghold have been transformed into museums however, and there were strict rules of not taking any pictures. I wasn’t too bothered by this at first, until I entered the main castle where I could gaze at awesome samurai armor and weaponry, way older than I will ever be. Also cool to do in this castle, is going all the way up top of the castle and enjoy a lovely view of the Hiroshima Peace Memorial Park and it’s surroundings. 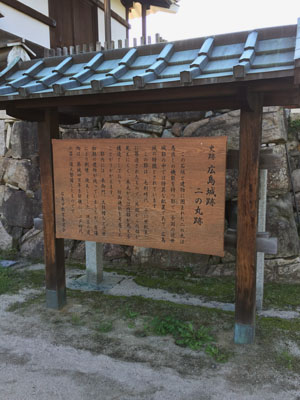 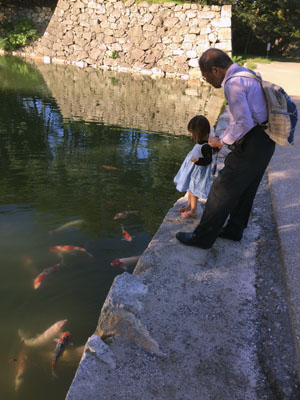 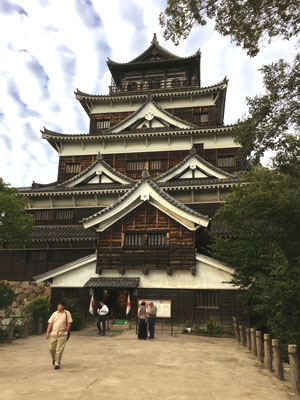 Back out, there’s a large shrine nearby that’s worth a visit. The custom here is to drop a coin into the large wooden box in front of the shrine, bow deeply, then clap your hands and bow deeply one more time. Oh but don’t forget to cleanse your hands first. Don’t worry, it’s all provided. I did the whole routine and it felt rather special to do. Little did I know that in Japan you have more chance of encountering such shrines than a trashcan. Seriously, everything is so goddamn clean in Japan yet there are barely any trashcans to be found. You’re expected to keep your empty bottles and such with you until you can disposed of it all back home. 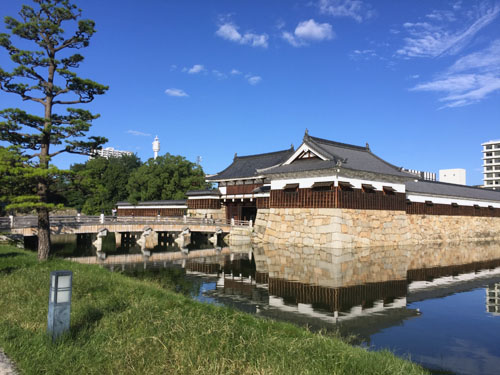 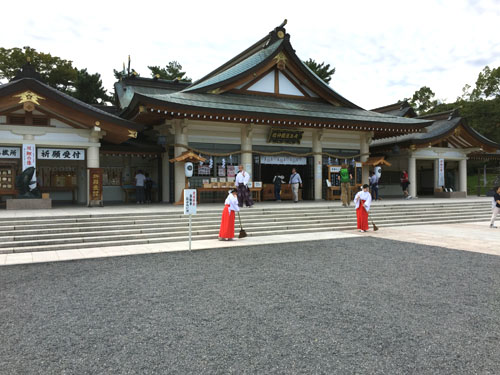 We continued wandering the lovely streets and soon it became time for dinner. We came across a restaurant where you had to place your order at a machine before entering. I’ve been told about these things before heading out to Japan, as it is a very common thing there. The machine had a useful touch-screen on which you could browse through the menu (after setting the language to English of course) and set up your entire dinner, drink included. You see your total price, insert the money and out of the machine comes your ticket and that’s it. The most crazy thing about all this was when we were seated and handed over our order tickets, it was mere minutes before it all was presented in front of us! Insanely quick service, hell we got our food before we got our drinks! 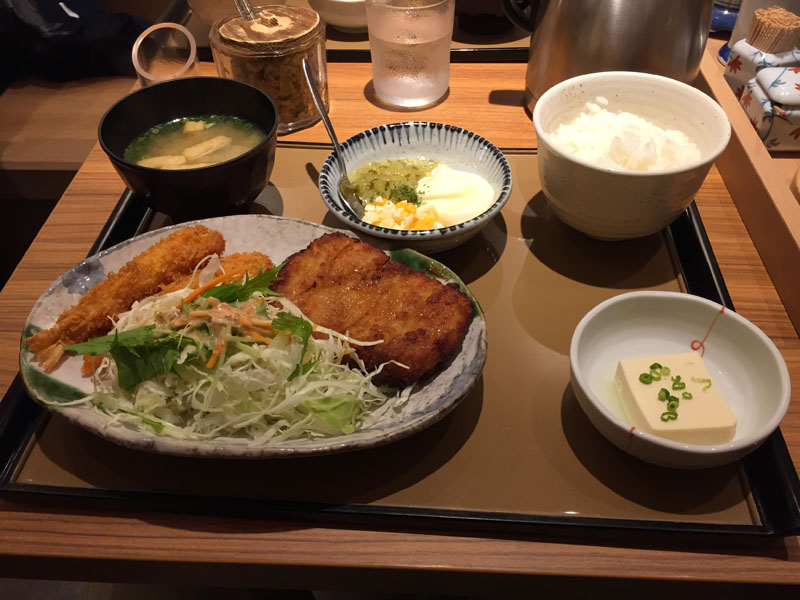 The food was delectable, as expected. While several of our group called it a night after dinner, one good fellow by the name of Wim fancied to explore the city some more. 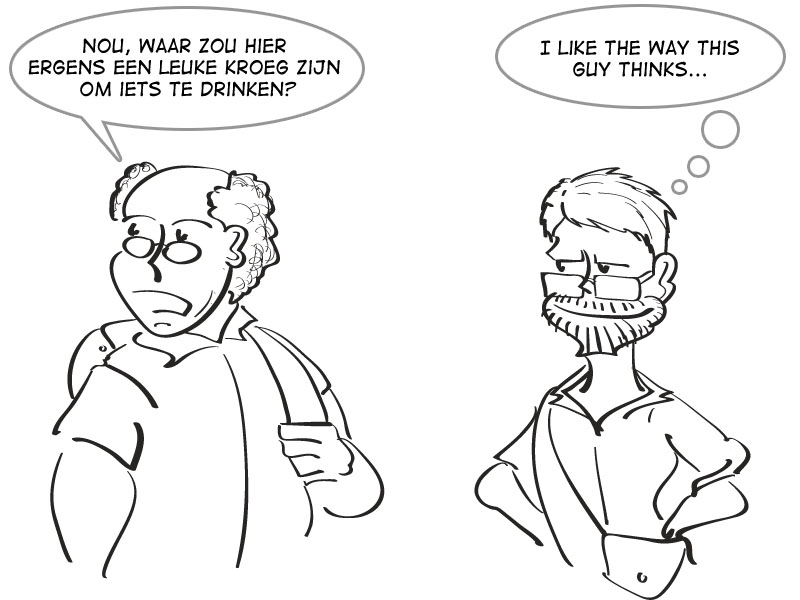 It was special to walk among the streets of a Japanese city in the evening. In Nagasaki we were more distracted by the events of the Kunchi Festival, but now we could enjoy the scenery of all the karaoke, pachinko and shopping stores that one can ask for. The pachinko parlors are literally insane to behold. A crazy mix of the brightest lights and the loudest noises. The craziest thing there are probably the people themselves. You see loads of Japanese businessmen sitting in front of their machine, not aware of anything in their surroundings. Every customer there seems to be in a trance. It is however a very private environment, as from the moment we walked in we were informed not to take any pictures.

Because it was in the middle of october, Halloween was all the rage. At every shop, there was tons of stuff like costumes, masks and fake pumpkins to buy at your leisure. Wim and I went through a 8-floor store filled with all sorts of crazy stuff for the average Japanese customer. We discovered that there were also basement floors, which turned out to be arcade floors! This was the stuff I was hoping for in Japan, but it was pretty overwhelming to see it in it’s full glory. It was just as loud and flashy as pachinko parlors, but also very dark. All of the bright lights came from the arcade machines. Wim seemed very overwhelmed, as this was something that he didn’t expect to encounter during the trip. All the stuff I saw in the arcade is worth a post of it own, so I’ll save that for in the near future.

Despite seeing so many amazing things, a bar wasn’t exactly one of them. Chances are they were all around us, just well hidden to the tourist eyes. When we called a quits and went back on our way to the hotel, we suddenly passed a place called ‘BAR LOUNGE’. It was written on a huge sign above it in huge letters, how could we have missed this? After laughing on how stupid we felt for not seeing this earlier, there was much rejoicing. We were welcome by an absolute gem of a cute Japanese girl. The lounge was big but almost empty, so she was probably thrilled to have some customers. Maybe too thrilled, judging from the way she took our order. 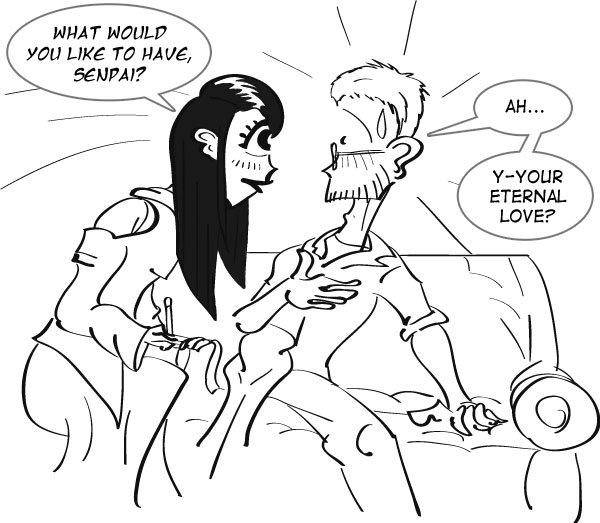 I’m over-exaggerating of course, but it was noticeable that she did crouch down to look us dead in the eyes, made all the more awkward by the fact that we were seated quite low in the couches. It was something that would reoccurs in the days to come. Japanese waiters tend to crouch down and look at you on eye level, instead of just standing there and ‘looking down on you’. The place was cousy and we had fun talking over several beers. We did leave with quite a check, as alcohol is anything but cheap in Japan. The cute waitress bowed deeply as we waved good-bye. I regret not taking a picture of her with the bar. Oh well, still a good end of a good day.