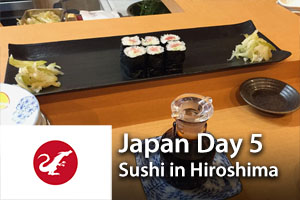 Time for some sushi sushi

Originally, this post was going to be part of the last day in Hiroshima, but I caught myself writing too much detail about what is… well actually, just dinnertime. So this experience is worth a post of it’s own. Not only that, but Christmas has just passed and one of the presents I’ve got was a sushi cookbook, so it seemed all the more suitable to talk about sushi.

While I did see here in Japan packages of decent sushi in every supermarket, for a much cheaper price than say, in precious Belgium, there were barely any real sushi restaurants to be had at this point. Then again, they were probably all around us, just well hidden for the tourist eyes. In hindsight we could have just walked up to any random Japanese person and just asked where to eat sushi. We would have been in an awesome place with all the sushi we could want in mere minutes. Instead, I relied on Tripadvisor (on a side note, there’s not only free Wi-Fi in the hotels but there are millions of free hotspots in Japan, so you can have all the internet access you want!) to guide our way to a fine sushi restaurant in Hiroshima.
After lots of walking, we arrived at the location, but we were unsure if it was the correct place. You can tell if a restaurant in Japan is tourist friendly, by whether or not they have an English menu hanging outside their doors. We now only saw Japanese characters all over the place, and the restaurant seemed packed with businessmen. As silly as it seems now, looking back at it, but we were a bit ‘scared’ to enter. We continued walking through the street, when Wim spotted a small sign that just said ‘sushi restaurant’. Again, there was no English menu to be seen outside, but just when we wanted to go on our way, the door of that little place opened and out popped the head of a shorthaired lady, implying us to enter. When we asked if they had an English menu, she cheerfully nodded so we had no excuse not to enter. 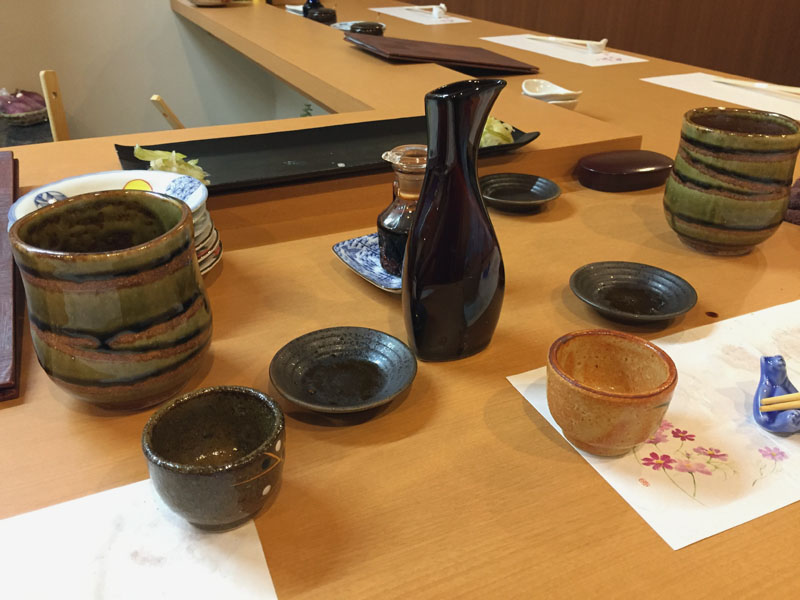 The restaurant was completely empty, aside from one couple in a separate room. The English menu was a simple handwritten menu with badly translated words, so we had no clear idea of what we were ordering. The chef had nothing to do at the moment so as soon as we placed our order, we could watch in full detail how our sushi was being prepared. His English was limited. He did his best to ask “where you from?” but when I answered “Belgium”, he looked confused. As if I was from a mythical world that was only mentioned in medieval legends. He was a very nice man though, as he guided us through the small courses. He would present us with small bits of sushi rolls and say “wit…sauce” and then tap on the soy bottle that was before us. Or he would make us nigiri and say “no…sauce” and cross his hands. The amount of sushi that we got, seemed mediocre so we kept ordering, but sushi has a sneaky way of catching your stomach by surprise and all a sudden, we were stuffed. Sadly, I was too much caught up in the moment that I’ve barely taken any pictures of our meal. 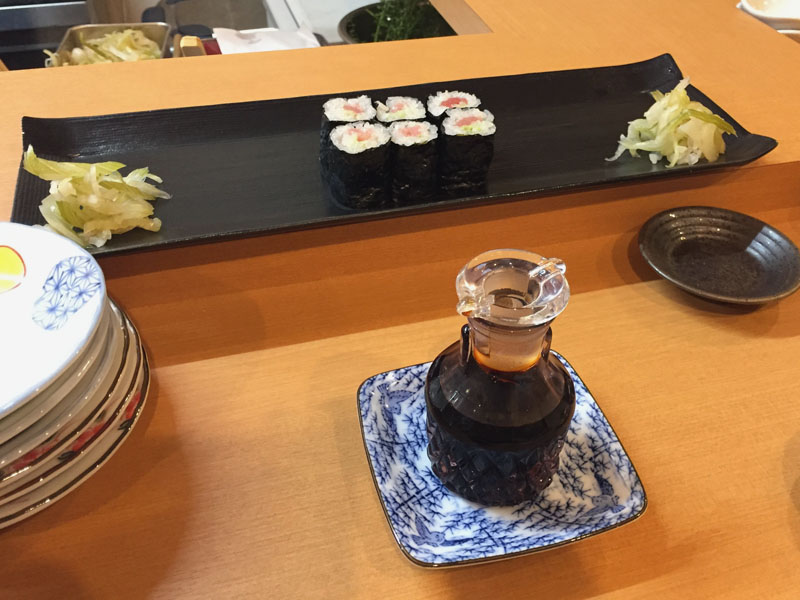 Now the question is of course, is the sushi in Japan better than elsewhere in the world? Well short answer is, yes… d’uh. But! That doesn’t mean you can’t enjoy sushi anymore in your local city. Like with most food, we have given a western swing to sushi. The sushi in Japan is simpler. Don’t expect to find ‘Dragon eyes’ or ‘California rolls’ anywhere soon (as far as I know) in Japan. That being said, the sushi in Japan is so…goddamn…fresh! The fish-melting-on-your-tongue-kind of fresh! I can understand why the chef mentioned that most sushi shouldn’t be eaten with sauce. You have to savour the flavour that is being bestowed upon you. That’s why the sushi is so…simple. Just a roll of rice with a piece of fish in it. That’s all it needs to be tasty. 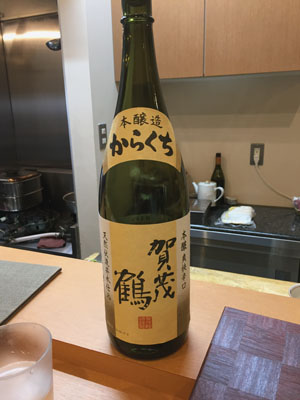 Despite their limited knowledge of English, the chef and the shorthaired waitress served us with the utmost politeness and generosity. And we, despite our limited knowledge of Japanese, did our utmost best to shown our gratitude. Well ‘utmost’ may be not the right way to put it, but we did stick around way longer than the average customer would for some sushi. I glanced again at the handwritten menu, and saw something else that I haven’t tried yet in Japan: Sake!

Sake, in case you didn’t know, is Japanese rice wine, often served warmed. The waitress showed us two giant bottles to choose from, with the chef explaining “stron…and ather…no so stron…” while pointing at the bottles. We went with the ‘no so stron’. We were given the sake in a cute little bottle along with two tiny cups, as the sake was meant to drink in small doses. I hate to say this, but the sake didn’t taste all that special. It tasted like warm white wine, which it basically probably is. That’s not a bad thing, far from it. But if you were hoping for a special unique beverage, sake is not it. But then again, I’m no expert. Sake wasn’t the main thing I would be drinking for the remainder of the trip. The rice wine did go down smooth though, maybe a bit too smooth: 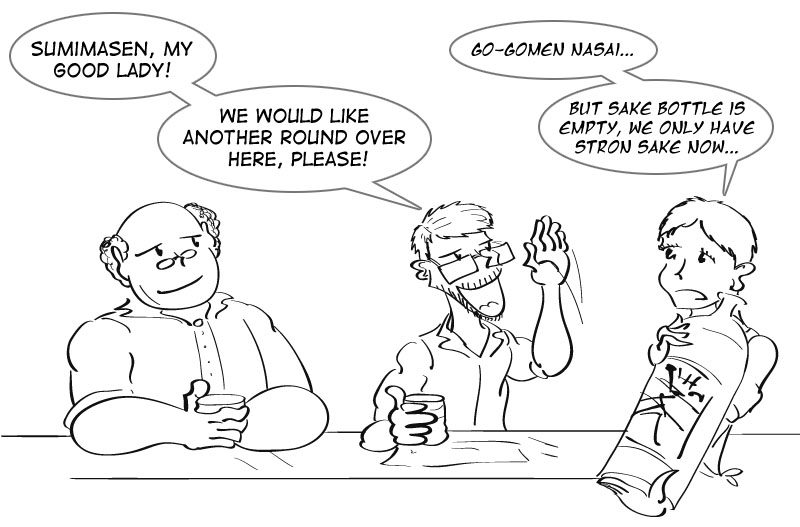 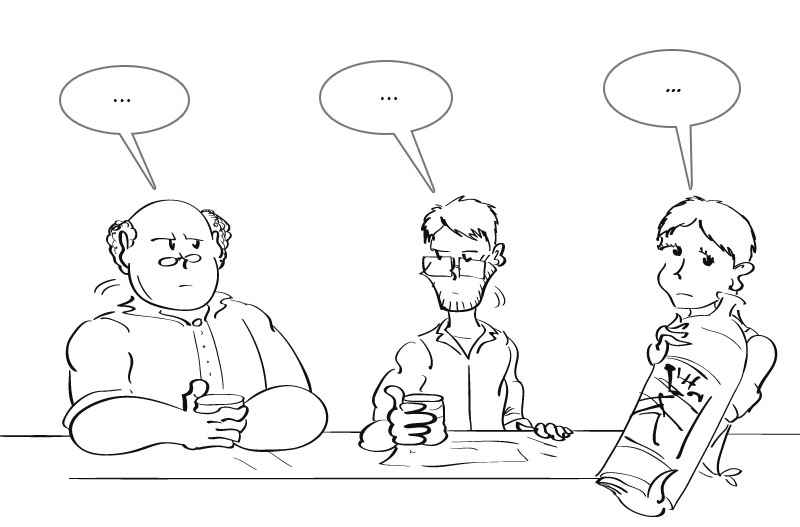 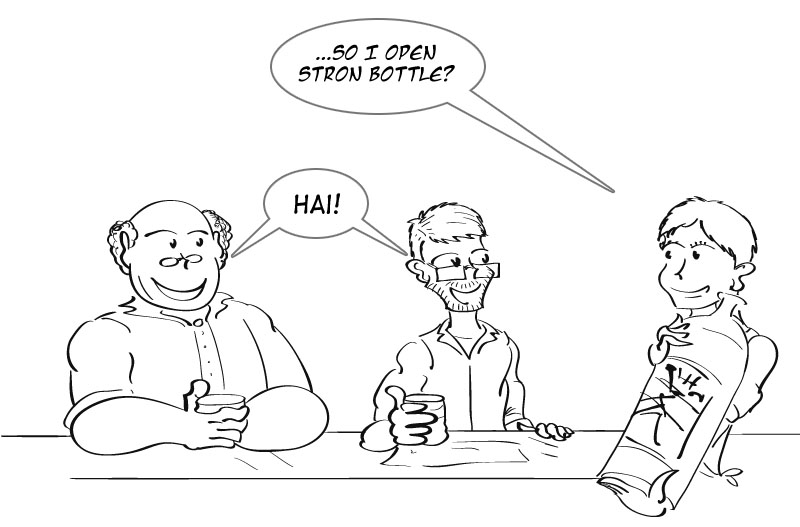 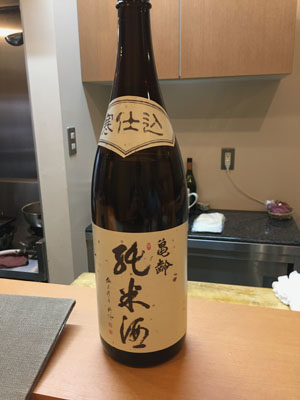 Wim and I had fun; drinking, laughing, talking but mostly wondering. We were filled with hundreds of questions that we wanted to ask the chef and the waitress. “Who are you guys?” “This place is so clean, have you guys just started?” “Are you a couple or just friends or brother and sister?” “Is it hard to run a sushi business?” “How is it living in Hiroshima?” “Do you often get foreigners who end up drinking all your precious sake?”. As special as it is to visit temples and monuments of Japan, I also wanted to discover the common life. I had a feeling this was a sample of it, and I couldn’t discover anything more due to the language barrier. This was one of those moments that made me really want to learn Japanese.

After several “kampai!” cheers and getting slowly but surely tipsy, it was time to call it a night. At the start of our trip, our guide provided us with a small sheet of Japanese phrases to help us on our way, so we awkwardly read off the sheet and said “o-kan-jo…one-gai-shi-ma-su?” to which the waitress cheerfully responded “Okanjo?” and showed us the cheque.
We thanked them as much as we could for the wonderful evening, and to our surprise they followed us all the way outside where they would wave us out until we were no longer in sight. We felt like royalty (or maybe they were just worried that we’d fall on our ass from all the sake we drank). 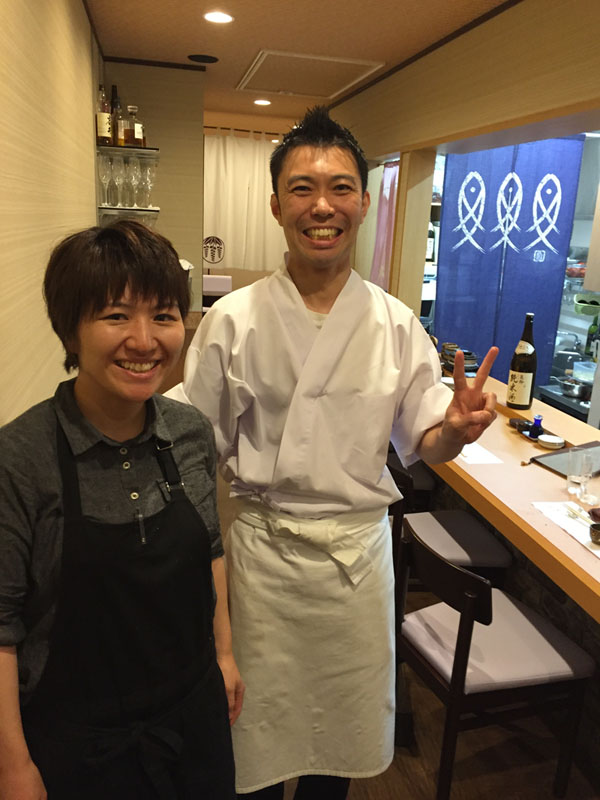 Maybe it was due to the sake, but I forgot to ask for a business card to keep as a souvenir. We didn’t even know what the sushi restaurant was called. While writing this however, I did some digging on Google Maps and luck would have it, I found the place! Fujiya!
So if you’re ever in Hiroshima and looking for some nice, tasty sushi, this restaurant comes highly recommend!