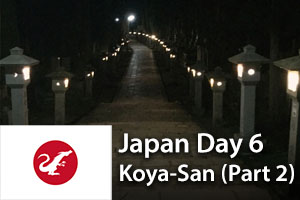 Before I go into the evening in Koyasan, a faithful reader pointed out that what we wore for dinner, were not kimonos but ‘yukatas’. Kimonos are apparently way too fancy for the common folk, let alone dumbass tourists as ourselves. So yeah, I was wearing a yukata, but I was still sexy as hell, believe that!

The town that goes to sleep early

The dinner presented to us in Koyasan, was ‘Shojin Ryori’, a traditional vegetarian meal. To be quite honest, I was happy that my stomach was already mostly filled with beef bowl. Everything had either an awkward flavour or no flavour at all (looking at you, tofu!). However, we could have all the white rice we could ever ask for. The dessert was a mix of all sorts of small pieces of fruit. Very sweet, like your typical Japanese dessert. We could also enjoy some tasty sake, which was the real stuff. A few of our group never tried it before and coughed heavily upon drinking it.
It was funny getting up after dinner, since I did my best to sit in the traditional fashion (also known as ‘seiza’), which is on your knees and lower legs. If you’re not accustom to that, your legs will go to sleep asap. So imaging standing up after sitting like that for half an hour. 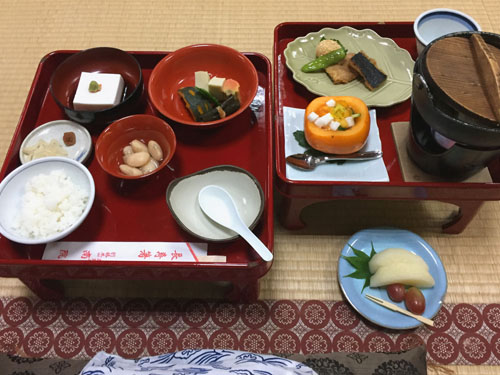 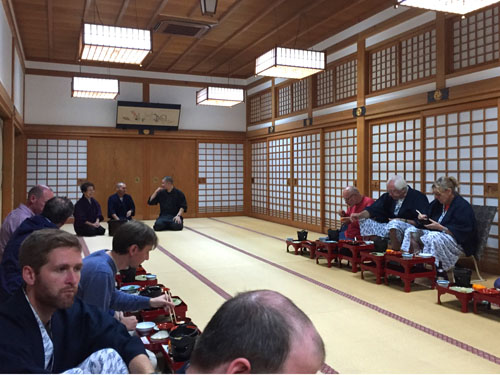 Our temple lodging also came with gender-separated hot baths, famously known as ‘onsen’. This was one of the things I was really looking forward to; though I also feared I might not be able to go into an onsen due to my tattoos. Japanese are very strict on not allowing tattooed people into public baths (if I must believe the internets, the main reason behind this is that Japanese people believe that any tattooed person in Japan is somehow linked to the Yakuza). Surprisingly, the monks were totally cool with it. This was probably because the baths were only meant for us foreigners, so I couldn’t soil any sacred hot spring with my demonic ink.
I was looking so much forward to this experience, that straight after dinner I went into our onsen (the male one of course!). In hindsight, that was a very stupid idea. 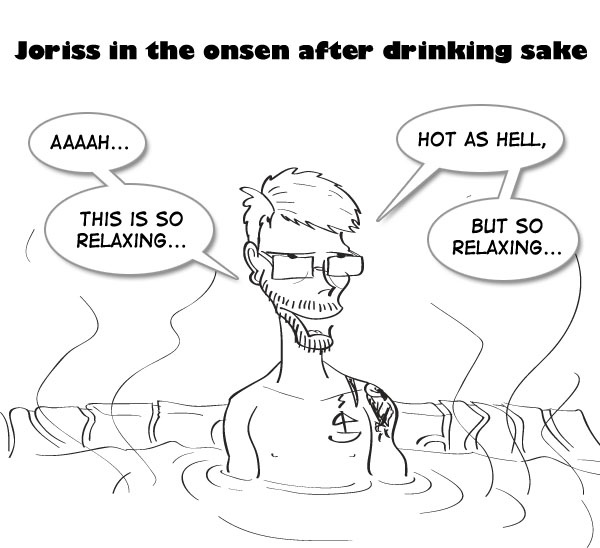 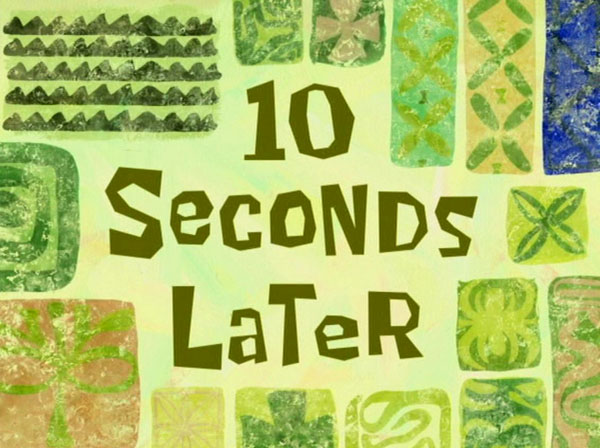 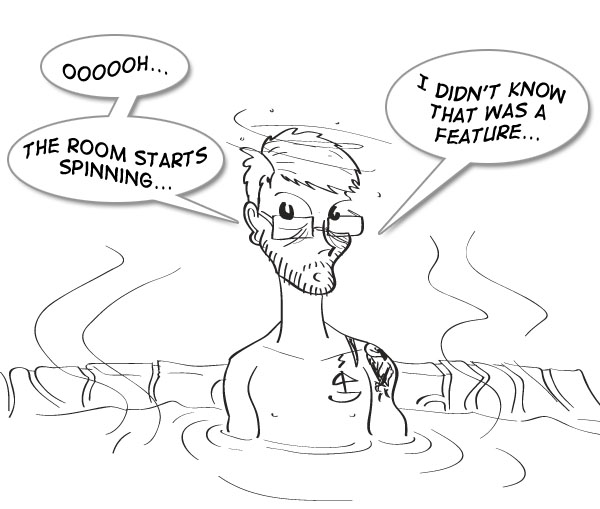 With the sake from our dinner coursing heavily through my veins, stepping into an extremely hot bath is one of the last things I should have done. I also didn’t expect an onsen to be so damn hot. Like really, you’re boiling! Here I was, thinking one can enjoy a nice hot bath for like an hour, but the way to go into an onsen, is to ‘cleanse’ yourself first with a shower, go into the onsen for like 10 minutes tops, then go back out and cleanse yourself to cool down, back into the onsen and repeat.
After my arms went numb, I took the slowest time ever to exit the bath. Our guide checked on me several times, advising to take it easy and just rest on the edge of the bath with my feet in the water, to get accustom to the heat. I didn’t dare go any deeper than my knees though. So in the end, only my feet were able to properly enjoy the warmth of the onsen.

Feeling stupid about my ruined experience, I didn’t want my evening to end this way. The graveyard came heavily recommended for an evening walk, so out I went. Just walking there was a special experience on it’s own, as there were barely any people to be found on the streets. At one point, I suddenly heard a sound unlike anything I’ve ever heard in my life. Then I realised, it was 21.00.
I totally forgot about the huge temple bell that would be rung at this hour, and all the tiny bells that would follow afterwards. It created a musical composition of absolute glory. Alas, I couldn’t find on the internets a video of some kind of these sounds, so all I can say is “you should have been there…”. 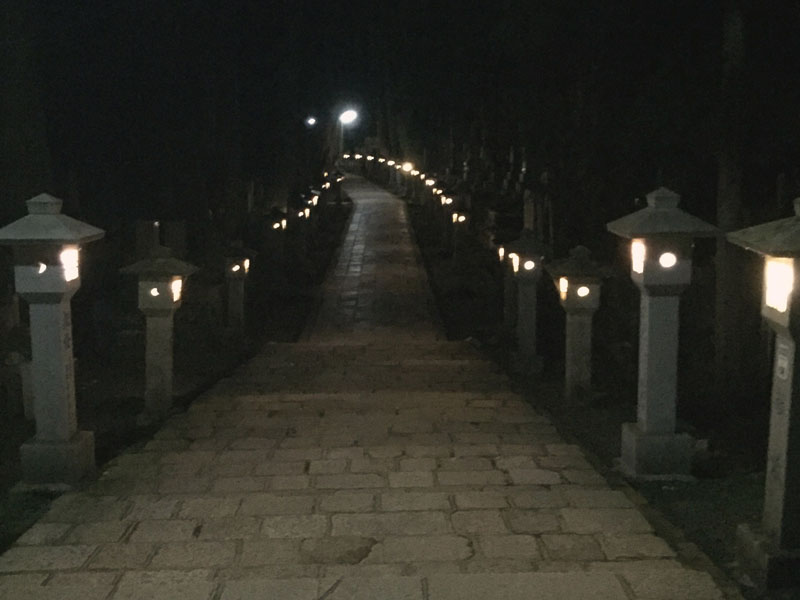 I went from one magical moment into another. I’m talking about the cemetery, Okunoin, of course. The main path was now lit by hundreds of lanterns, and they looked like fireflies in the distance. You could barely see any of the tombstones anymore, but that didn’t matter. Just walking there between these lovely fireflies was pleasant enough. After passing like one of two other tourists, I suddenly discovered something amazing:

Absolute silence. No people talking, no wind blowing through the trees, no crackling of leafs, no crickets, no nothing. The only sounds I could hear came from my slow breathing and my own footsteps. I stood still and held my breath for several moments, and enjoyed the eerie yet magical presence of nothingness. Then I scared myself by walking again. Silly me. 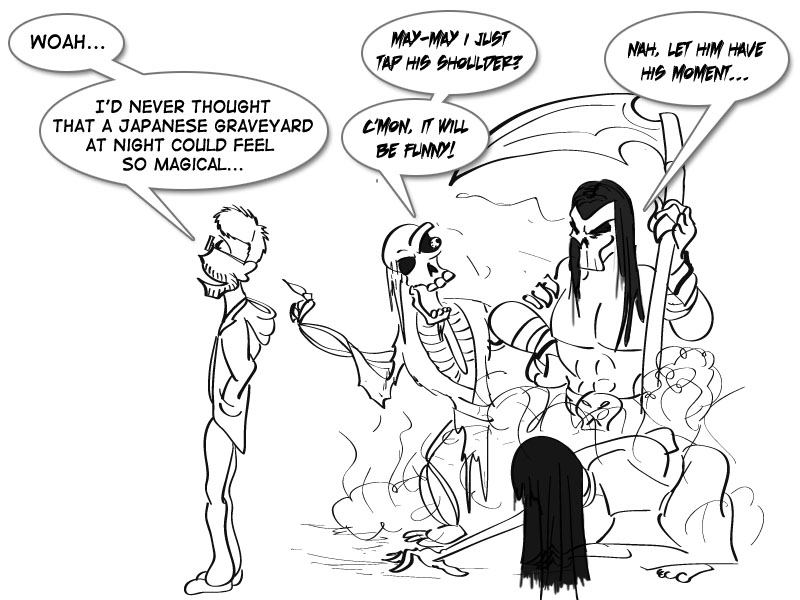 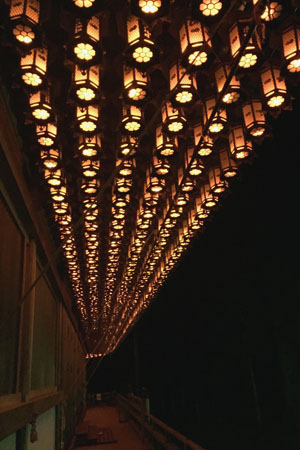 Another good reason to visit Okunoin at night is the lantern hall in the end. Though closed, hundreds of small lanterns are lit underneath the roof, making the hall glow as bright as the sun. I wandered around quietly, and discovered in the back a monk mediating in front of a small shrine. It looked epic, like the stuff you would only see in movies. I dare not get any closer to make a picture. I reckon it would have been very disrespectful to the monk. So I took my leave.

I didn’t cross anyone in the cemetery on my way out, and I was slowly starting to worry that there might be some barricade at the start, and I would have to crawl myself out of the closed cemetery through the trees. Luckily, there was no such thing to be found at the entrance. It seems Okunoin is open 24/7.

You know what isn’t open 24/7? Our shukubo! I should have taken the dead streets already as a hint. It seems everyone goes to sleep in Koyasan before 22.00 (expect for one Japanese teenage girl, who was walking carefree through the streets, yelling cheerfully into her cellphone). I found myself petrified in front of the large locked gate doors of our shukubo. I thought luck was on my side as there was a small side path nearby, rendering the large gate useless. But alas, the front doors were locked just as well. After several heavy knocks on the doors with no response, panic was starting to sink in. I also couldn’t get any reception on my phone. I didn’t know what to do. I didn’t even dare to yell; as it seemed logical in my head that it was more important in Koyasan to maintain the peace than not sleeping outside. 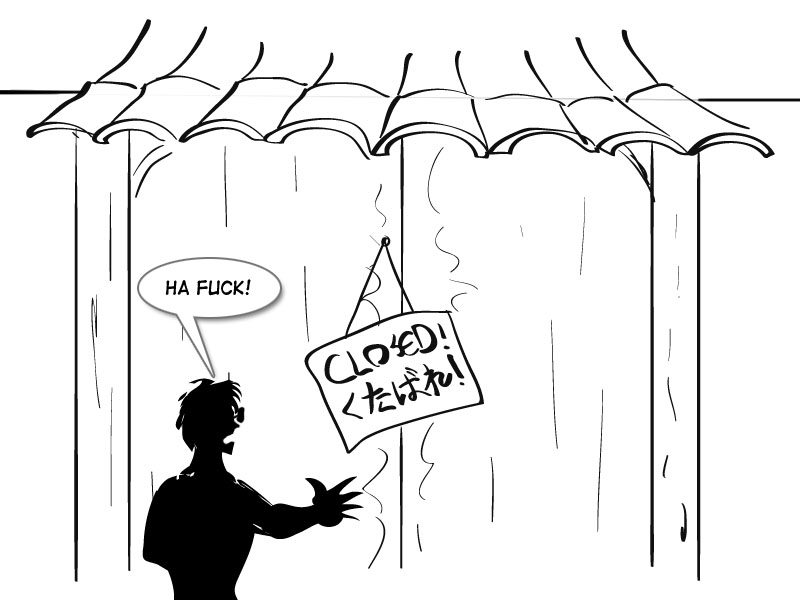 I ‘could’ if I really wanted to, just break through the doors, as it was nothing more then some wood & paper, but I didn’t want to damage anything. Probably that’s why my knocks didn’t came through, I was way too silent. And gently out of fear of damaging anything. I panicked around like crazy for what left like an eternity (made all the more silly by me running around on my socks, as you have to leave your shoes at the front doors), but actually only like 10 minutes later I heard nearby water running. Then I saw through the windows one of the monks walking, who probably just came from the restroom. I started banging on the windows near him, which gave the poor lad quite the jump-scare. He quickly opened the doors and I was finally able to pull off my best Japanese ever by saying ‘gomen-nasai’ over and over again, along with bowing like crazy. I ended it by saying in awkward English “I go…sleep…in room…”.

Now you would think that I’d feel insanely relieved now that I’m back in my own bedroom, and I thought I was. However my brain decided to pull off another dick move: 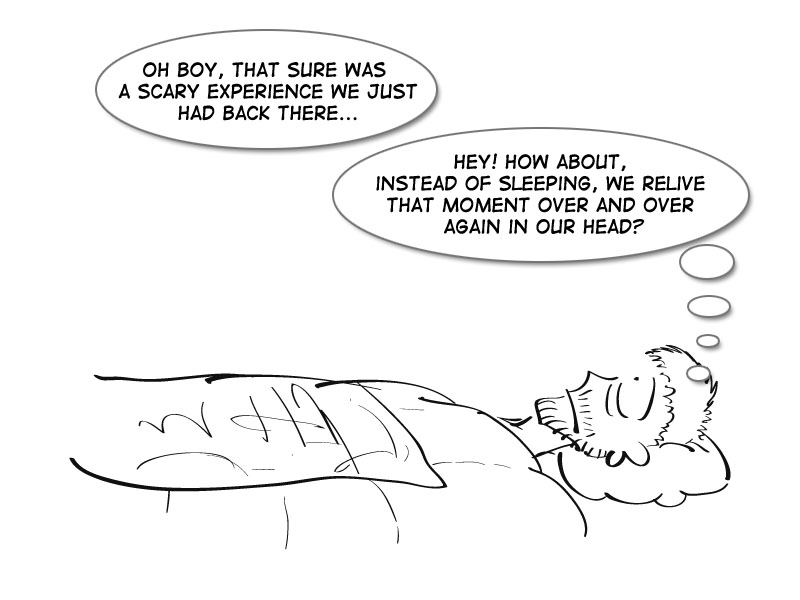 I didn’t sleep at all that night. I didn’t enjoy sleeping on a futon at all. It felt more like there was nothing on my back. I did enjoy the free Wi-Fi to whatsapp about my silly experience, hoping it would ease me. It didn’t. The only sleep I got was mere minutes before the morning prayers started. I hope I didn’t brought too much dishonour to the shukubo by not attending it…

Join me next time as we head out to the great city of Kyoto!